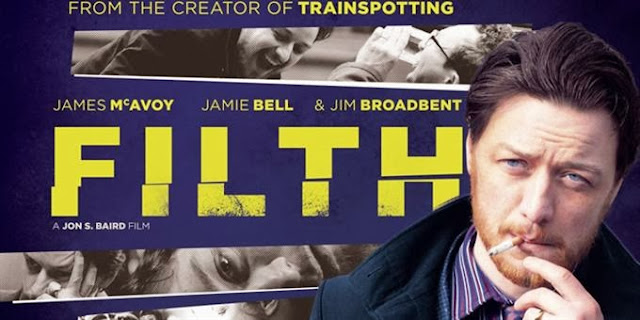 Drugs, booze and kinky sex are the order of the day in Jon S. Baird’s latest film, Filth. James McAvoy stars as Bruce Robertson, Scotland’s most debauched detective, whose personal and professional life is teetering on the brink of annihilation. Awkwardly-paced and overtly-misogynistic, unfortunately Filth never really settles into its rhythm. The film has its moments but unfortunately it left me feeling a tad meh.

Based upon the Irvine Welsh novel of the same name, Filth follows Bruce around as he drinks, snorts and shags anything he can get his hands on. He is a selfish, manipulative and morally corrupt bastard who is always playing perverse practical jokes on his nearest and dearest. However, things start to unravel for Bruce during a murder investigation when his extracurricular activities start to catch up with him and his life starts to spiral out of control.

James McAvoy is an actor with an immense range. A glance at the breadth and variety of his filmography reveals that he’s rarely typecast. He’s managed to star in a vast array of projects from superhero to period-piece dramas. He’s exceptionally good in this film as a man who’s careening to the edge of self-destruction. McAvoy’s performance is fascinating to watch as his personal demons start to seep out through the multitude of cracks in his personality. While it’s a very loud and showy performance, it still allows for moments of raw vulnerability which Mr McAvoy knocks out of the park. He is supported very well by Jamie Bell (Billy Elliot), Eddie Marsan (The World’s End) and Jim Broadbent who has a small but pivotal role. The female cast members are unfortunately reduced to sexual conquests or recipients of Bruce’s verbal abuse; both tire quickly.

The problem is there isn’t anyone worth rooting for in this film, which eliminates the dramatic tension. Bruce is running around doing god knows what to lord knows who and I didn’t particularly care for him or them. This could very well be the point of the story but it doesn’t make it interesting to engage with. My mind kept wandering during this film, perhaps searching for a reason to stay invested. If we are meant to stumble down a warped and twisted rabbit hole into the depths of Bruce’s mind, then we get that but it’s really not enough. To make matters worse, the film has a bizarre tonal shift in the last act which came out of nowhere and attempted to re-write too much about the film far too late in the story. The final scenes feel rushed and too convenient, which is a shame.

Filth is not for the faint of heart. It’s a darkly disturbing tale about a man with nothing to live for except the very poisons that were his undoing. If you’re a fan of Trainspotting then this film will have a certain appeal, but for everyone else this is really a case of buyer beware: if the trailer doesn’t hook you, better give this one a miss.

Filth opens in select cinemas this Thursday. If you see Filth and agree or disagree with my review feel free to drop a comment below.