Adventure Time: Explore the Dungeon Because I Don't Know! Review 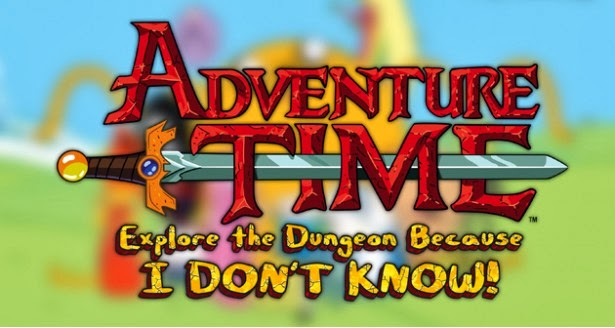 Pendleton Ward's charming animated series 'Adventure Time' has very quickly become a mainstay of Cartoon Network's scheduling and it's easy to see why. Memorable characters, a unique fantasy setting packed full nods to old school role playing and of course a great sense of humor all make for series that resonates with kids and adults alike.

Anyone who has seen an episode or two will agree that this is a series begging to be made into a video game. Not surprisingly it has been made into several, the latest of which is the not so concisely titled 'Adventure Time: Explore the Dungeon because I don't know', which I will refer to as 'Explore the Dungeon' for the sake of brevity. And indeed this name says it all, this game is about exploring a massive 100 level dungeon and that's about it.

On paper an Adventure Time style dungeon crawl sounds great, and for the first couple of levels it really is. You get to stomp around a dungeon with up to three friends playing as Finn, Jake, Marceline, Cinnamon Bun and a myriad of other iconic adventure time characters (and yes L.S.P is a playable character). Thankfully all of the voice actors from the show lend their vocal talents (voice-a-likes would have been a deal breaker for me) and the funny dialogue kept me laughing for the first five or so levels. Twenty identical levels later and my laughter had turned into pained tears of boredom.

The repetition in 'Explore the dungeon' is crippling and is very much it's undoing. With the exception of the two boss fights the first twenty levels (dungeons) feel almost identical and is only worsened by the fact that they are all inhabited by the same five or so monsters. Once you manage to power through this labyrinth of repetition you are 'rewarded' with ice dungeon levels a.k.a the levels you just played but with a different skin.

To be fair new monsters and obstacles are slowly introduced but it's not quick enough and these new additions can't make up for the fact that the combat is about as repetitive and stale as the level design. More boss fights and time trials make for interesting diversions but they are too few and far between only appearing every 10 levels. It all reeks of a rushed game.

Although solid, the graphics also add to the impending feeling that this game was churned out far too quickly. The visuals have a sort of 8-bit quality, reminiscent of vintage video games and all thee characters and enemies appear as cute pixelated sprites. For the most part it works but it comes across as a rip-off of retro game graphics rather then a fully fledged homage.

Underneath the multitude of design flaws plaguing this game there is a faint glimmer of hope. After all it is still set in the Adventure Time universe so it can't be a complete pile of garbage.

The humour and dialogue is all spot on and kept me chuckling for the most part. I also feel an honorable mention should go out to the 'huglust' curse that makes you hug your allies if you get to close. At first it's cute but soon becomes a problem when your trying to hack up skeletons with your vampire axe and Jake won't stop hugging you. So there is a silver lining here, albeit very faint, but it's certainly not enough to redeem this games many sins.

Overall I doubt that 'Explore the Dungeon' has much to offer the older gamer with it's repetitive level design and uninspired combat. At the same time I can't see kids persevering with this either. This raises the question of who was this game actually aimed at?

I fear that in an attempt to please everyone the developers have created a rushed unfocused mess that won't please anyone. I may pick this game up with a couple of friends for a quick 20 minute session here and there but it's doubtful.

I reviewed 'Adventure Time: Explore the Dungeon Because I Don't Know' on Playstation 3 but it's also available on Xbox 360, Nintendo DS, Nintendo Wii, Nintendo Wii U and PC.