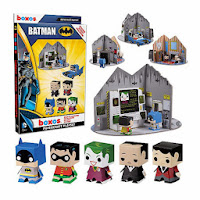 This Activity set is perfect for any Batman or Papercraft fan!

Super cute and easy to assemble, this set will be hours of fun for anyone and looks amazing when displayed anywhere.
The set includes a Papercraft Batman, Robin, Joker, Alfred, Bruce Wayne. Put together with a Papercraft Batmobile and amazing backgrounds, and you have the perfect Christmas gift!

Get it from: Amazon 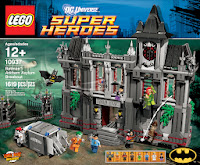 So we can all agree that the Marvel and DC Lego figurines and packs are awesome right? So how can you top them you ask?

Well Lego have done so with an Arkham Asylum playset!

Measuring at 32 cm high and 34 cm wide, the set is highly detailed with 8 rooms to play out all your Lego Superhero scenarios. The set also includes 8 minifigure: Batman, Robin, The Joker, The Penguin, Poison Ivy, Dr. Harleen Quinzel, Scarecrow and a Guard.

Get it from: Lego.com and all good toys stores

The modern anime classic that defines cool was re-released earlier this year on Blu-Ray and is a must for everyone. I say everyone because even non anime fans will get a kick out of this series. It features the tales of a bunch of intergalactic bounty hunters taking down wanted criminals one bounty at a time. The series has been praised for it's stories and the music used in the series.


You can check out my Geek of OZ review for it here.

Get it from: Madman and good DVD retailers

This new original Graphic Novel series sees the city of Acropolis besieged by Monsters and other Villains. All that stands in their way is a 12 year old demo-god named Battling Boy. Battling Boy gets his powers via a set of t-shrts with an animal totem on them, which allows him to access the characteristics of that animal.

An all ages book which is smart, fun and has a ton of imagination.

Get it from: Good book stores

Saga is a series that I cannot get enough of. A mixture of Fantasy and Science Fiction, this series takes you to the farthest reaches of your imagination and then beyond. An epic space opera/fantasy that depicts two lovers from long-warring races, Alan and Marko, on the run from either side of the war as they try to care for their newborn daughter Hazel, who also narrates the series.

Volumes 1 and 2 collect the first 12 issues of this amazing series.

Get it from: Good book stores