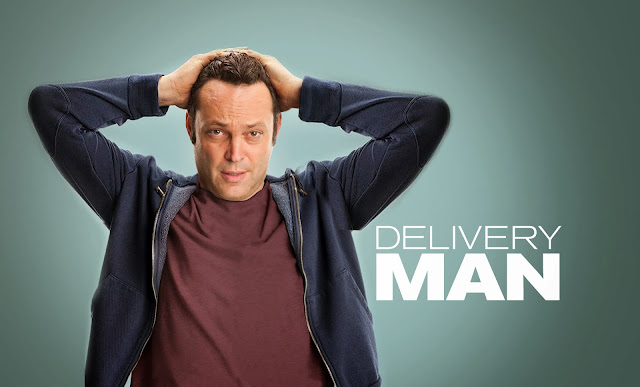 In a move set to shock no one, in his latest film Delivery Man, Vince Vaughn plays a schlubby, middle-aged slacker who is forced to face up to his responsibilities … blah blah … conflict … blah blah … resolution. Forgive my abrupt dismissal of it, but when a film is so overly formulaic as this manages to be, it’s nigh on impossible for it to work for me.

David Wozniak (Vaughn) is in a bit of a rut. He’s up to his eyeballs in debt, his girlfriend Emma (Cobie Smulders) has dumped him and he’s just found out he’s the father of 533 children as a result of a mix-up at his local sperm bank. To make matters worse, 142 of his progeny have launched legal proceedings to learn his identity. For a fairly simple plot concept, David’s situation is unnecessarily explained ad nauseum throughout the film. The problem being is that past the first revelation, it isn’t that interesting.

My biggest gripe with the film is that it’s not particularly funny. Sure there are a few chuckles here and there, but far fewer than you’d expect given the cast. I’ve long been a fan of Vince Vaughn’s brand of two speed comedy; it’s either loveable-rogue-comes-good or snide-cynical bad-boy-comes-good. Vaughn is starting to look tired, almost as if he knows it’s a bit of stretch to keep playing the same old characters. Compounding the issue is that he is completely outclassed comedically by Chris Pratt who plays his lawyer/best friend for the pending lawsuit. Cobie Smulders is given very little to do, which is so frustrating considering we’ve seen how funny she can be on How I Met Your Mother.

Delivery Man is a remake of the 2011 film Starbuck. Interestingly the films are both directed by Ken Scott. Whilst it’s not uncommon for films to be remade for the American market, it’s less common for it to be done so soon and by the same director. The film has real issues with its tone, swinging wildly between silly and comedic scenes to heartfelt moments. Sadly, the film didn’t really nail either particularly well. Perhaps the director will get a third crack at it to iron out the problems ...?

The film spends way too much time and effort building up to the big lawsuit, which in the end is disappointingly anti-climactic, including only three very brief scenes. This should have been the bulk of the film. The courtroom setting has the potential for comedy, tension and drama which would have helped develop most of the characters all at the same time. Instead we get way too many pointless interactions between David and the kids.

Delivery Man isn’t worth racing out to see. Even the most devout Vince Vaughn of fans would have to admit that his star has gone from a wane to a plummet of late. He’s well and truly due a big hit to get things going again. Sadly this isn’t it. Stay home and re-watch Old School, Dodgeball or Anchorman to see classic Vince Vaughn in action.