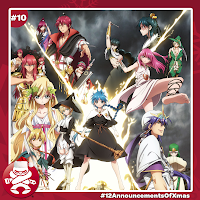 
Based on Shinobu Ohtaka's original manga series, MAGI 2: THE KINGDOM OF MAGIC re-imagines tales from the classic story ONE THOUSAND AND ONE NIGHTS (also known as ARABIAN NIGHTS).

MAGI 2: THE KINGDOM OF MAGIC comes to various platforms in 2014.