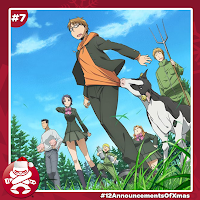 This coming-of-age story follows Yugo Hachiken, a high school student who decides to attend ‘Ezono’ - the Oezo Agricultural High School - to escape the academic pressures at his preparatory school back in Sapporo. But, Yugo quickly realizes that things are just not that simple, and is forced to face whole new set of hurdles at Ezono.

Yugo begins to feel a different kind of pressure as he comes to deal with new classmates who, compared to him, all have a much clearer view of what they want for their futures. Over the course of the series, Yugo will grow, both physically and mentally as he faces all the challenges the Ezono puts in his way

Created by Hiromu Arakawa, the SILVER SPOON manga has been awarded both the 5th Manga Taisho Award and the 58th Shogakukan Manga Award and has sold over 7.5 million copies in Japan.

SILVER SPOON will be available on DVD in late 2014.