Arguably one of the biggest (and best) things to grace screens in 2013 has been the final season of Matt Smith's run on Doctor Who and 2014 is promising to be a blast for Aussie Whovians. The Hub Productions have just announced that both Matt Smith and Karen Gillan will be gracing our shores during their appearances at the 2014 Whoniverse. 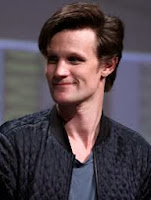 There is no better way for fans of bow ties and fezzes to ring in the New Year than with confirmation that Doctor Who stars Matt Smith and Karen Gillan are set to headline four exclusive The Hub Productions’ events in Australia next March. Forget the Doctor Who Christmas Special – this is the biggest news in the whoniverse this holiday season.

For three years Smith and Gillan delighted fans together as The Eleventh Doctor and his companion Amy Pond in the hit TV series Doctor Who and next year they will reunite for a massive tour of Australia, with stops scheduled in Sydney, Perth, Adelaide and Melbourne. It will be the first time the pair appear as guests at Australian conventions and Doctor Who devotees are in for an experience that is out of this world (and time and space)!

The Hub Productions’ Whoniverse shows will be bigger on the inside with Smith and Gillan appearing on stage to share stories and participate in Q&As with fans. Each show will also feature autograph and professional photograph opportunities. Plus, limited tickets will be available for a special meet and greet event with both stars. Tickets go on sale in January. For more information visit www.thehubproductions.com.
BBC Doctor Who Dr Who Karen Gillan Matt Smith Sci Fi The Hub Productions