*CLOSED* Now You See Me Competition 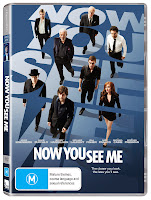 Thanks to our friends at Hopscotch, we've got five copies of the action packed NOW YOU SEE ME on DVD to give away.

Now You See Me pits an elite FBI squad in a game of cat and mouse against "The Four Horsemen", a magic super-team of the world's greatest illusionists. The Four Horsemen pull off a series of daring heists against corrupt business leaders during their performances, and then funnel the millions of stolen profits into their audiences bank accounts, while staying one step ahead of the law.

FBI Special Agent Dylan (Ruffalo) is determined to make the magicians pay for their crimes-and to stop them before they pull off what promises to be an even more audacious heist. But he's forced to partner with Alma (Laurent), an Interpol detective about whom he is instantly suspicious. Out of desperation he turns to Thaddeus (Freeman), a famed magic debunker, who claims the bank heist was accomplished using disguises and video trickery. One thing Dylan and Alma agree on is that the Horsemen must have an outside point person, and that finding him (or her) is key to ending the magicians' crime spree. Could it be Thaddeus? Or Alma? Or could it really be... magic?

So, to get your hands on a copy, all you have to do is fill out the form below and you're in the running! Don't forget, you can get yourself a bonus entry just by following us on Twitter or liking us on Facebook!
THIS COMPETITION HAS CLOSED

Entries close 11:59pm on Sunday 22nd December 2013. Your details will not be used in any way other than for the delivery of your prize. Geek of Oz and Hopscotch do not take any responsibility for the loss, damage or delay of/to prizes sent to winners (blame Australia Post for that one). The judges decision is final and no correspondence will be entered upon. One entry per person, subsequent entries will be void. Incorrect answers will be void. Prizes are not redeemable for cash or any other kind of trading currency such as creds, latinum, sen, kan, zeni, double dollars or Ankh Morpork dollars. Geek Of Oz take no responsibility for head explosions caused by utter awesomeness. This competition is only open to Australian residents. Any questions or queries can be submitted through the comment section at the bottom of screen. Good luck!
Competitions Now You See Me