*CLOSED* Win The IT Crowd: The Internet is Coming 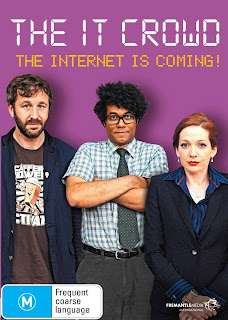 Thanks to our friends at Roadshow, we've got five copies of THE IT CROWD: THE INTERNET IS COMING on DVD to give away.

Roy, Moss & Jen are right back where we left them – in the basement of Reynholm Industries. Except now there’s newer computers and Roy has finally managed to convince one of the girls on the seventh floor to go out with him more than once.


Then an incident involving spilt coffee, a homeless person and Roy and Jen looking despicable is filmed on a camera phone and goes viral on the internet. Once Jen and Roy are identified, their reputations and that of Reynholm Industries are at risk. And of course everything they do only makes it worse.

Meanwhile, before Douglas goes off to do "Secret Millionaire", he shares with Moss his secret of confidence and Moss is transformed. A confident Moss devises a plan to help Jen and Roy recover their reputation but it all seems too good to be true.

As funny as ever, and sure to delight fans of the series, THE IT CROWD: THE INTERNET IS COMING! is a fond farewell to this cult British comedy.

So, to get your hands on a copy, all you have to do is fill out the form below and you're in the running! Don't forget, you can get yourself a bonus entry just by following us on Twitter or liking us on Facebook!

Entries close 11:59pm on Sunday 5th January 2014. Your details will not be used in any way other than for the delivery of your prize. Geek of Oz and Roadshow do not take any responsibility for the loss, damage or delay of/to prizes sent to winners (blame Australia Post for that one). The judges decision is final and no correspondence will be entered upon. One entry per person, subsequent entries will be void. Incorrect answers will be void. Prizes are not redeemable for cash or any other kind of trading currency such as creds, latinum, sen, kan, zeni, double dollars or Ankh Morpork dollars. Geek Of Oz take no responsibility for head explosions caused by utter awesomeness. This competition is only open to Australian residents. Any questions or queries can be submitted through the comment section at the bottom of screen. Good luck!
competition Competitions The IT Crowd