Aussie Short Film "Nerds in Love" to Premiere at Flickerfest

Earlier this evening I had the pleasure of speaking to 25 year old Sydney based Director and Producer, Sean Rodrigo. Our chat was exhilarating due in no small part to his infectious passion for his upcoming short film, Nerds in Love, which is due to premiere at Flickerfest, a BAFTA recognised event. 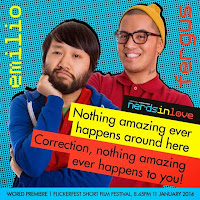 Sean said: “I wrote the film while I was at a real crossroads in my life, working average jobs, struggling with my career path, wondering if I was ever going to make it as a filmmaker. But out of this challenging time came the inspiration for ‘Nerds in Love’ – a film that’s essentially about hope and finding love and friendship in an unlikely situation; themes I’m sure the Flickerfest audience will relate to.”

And so ‘Nerds in Love’ was born. With a quality script in hand, which took him years to craft, Sean leveraged off connections he’d made through freelance directing gigs and a stint at MTV to secure top tier acting and production talent for the film, including: Lawrence Leung (ABC and SBS) Stan Walker (Australian Idol winner, 2009) and up and coming Sydney actress Tessa De Josselin, as well as ‘Dumb Ways to Die’ composer and Cat Empire keyboardist and backing vocalist Ollie McGill – and post VFX and sound production by some of Australia’s best post houses: The Refinery, Jumbla, Engine, Sonar Sound, and FSM. 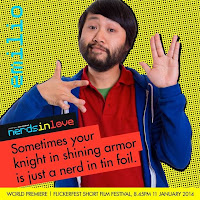 Sean concluded with: “There’s a lot of uncertainty, doubt and darkness in the world today, and I love films that give you something good to hope for; films such as Jean- Pierre Jeunet’s ‘Amelie’ or Taika Wititi’s ‘Boy’ – great sources of inspiration to me – in which viewers are immersed in a world populated by optimistic themes and characters.

Off the back of his Flickerfest success, Sean plans to submit ‘Nerds in Love’ into other festivals both here and abroad while pursuing freelance directing/production projects in Australia.