Case Closed really shouldn't be as good as it is. The episodic nature of the series is formulaic, the animation is showing its age and the music is completely underwhelming but against all odds, this series is fantastic.

Jimmy Kudo is a brilliant teenage detective who has the world at his feet. His ability to crack cases that even hardened police officers can't solve is legendary but unfortunately for Jimmy, he's closed his last case. When he stumbles upon a major case he finds himself on the wrong side of some very bad people who capture poor Jimmy and feed him a drug which turns him back into a kid! So as not to give away his secret, Jimmy changes his name to Conan Edogawa and needless to say, hijnks ensue. 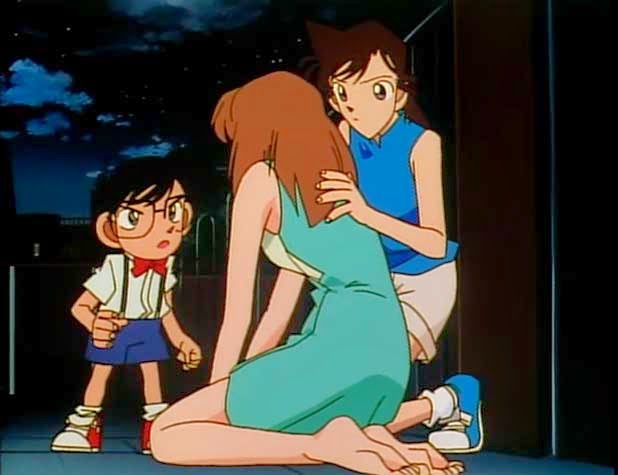 The animation quality has seriously dated which is completely understandable given its 18 year vintage. However, TMS have done a fantastic job in realising the overall aesthetic of the source material, the long-running manga series by Gosho Aoyama. Not only do the characters look like they do in the manga, but the setting does as well. Case Closed walks a fine line between being placed in a Japanese and a Western setting, a fact that is reflected through much of the series. Uniform police in the series look like Tokyo's finest while the detectives look like NYPD gumshoes. Even the name Conan Edogawa reflects the east meets west melding. Conan alludes to Sherlock Holmes creator Arthur Conan Doyle while Ranpo relates to Edogawa Ranpo, a Japanese mystery writer from the early 1900's (fun fact: Edogawa Ranpo is pseudonym and homage to American novelist Edgar Allan Poe). Conan Edogawa is a wonderfully innocent yet brilliant mind and sometimes characteristically resembles a chibi version of Sherlock Holmes and even Lupin III.

Just as with the works of Edogawa Ranpo and Sir Arthur Conan Doyle, the fun of this series is delivered through experiencing the solving of crimes. The episodic nature of the series uses a classic crime, evidence, solution chain of events with a little bit of misdirection thrown in for good measure. Not only do we follow the story through Conan's analytical mind but are also treated to his efforts in concealing his true identity. The pure innocence of this series will see you championing the young detective at every turn, wishing not only success in solving cases, but also in his own attempts at subterfuge.

Although reasonably formulaic and sometimes rather awkward looking, Case Closed manages to be a real treat and proves that through solid story telling, even some of the oldest genre tropes can still be relevant and extremely exciting. Don't let the exterior fool you, Case Closed does have a tendency to be mildly violent so it would probably be best suited to audiences 13 and above. It looks as though Hanabee are only planning to release the first two seasons, a total of 52 out of 739 (at the time of writing) episodes. Hopefully, if this series manages to sell as well as it deserves, we'll be treated to even more of Conan Edogawa's adventures in the future.