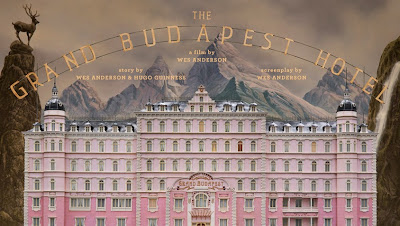 There are two kinds of people in this world: those who recognise the genius of Wes Anderson and everyone else. I tumbled down the Anderson rabbit-hole after seeing Rushmore (1998), my first taste of that special blend of the peculiar which Anderson is renowned for. Not without a few niggling problems, his latest offering The Grand Budapest Hotel is an ambitious project, reinforcing that he is a master of ‘dolls house’ style film making, but more on that later. For pure escapism it’s hard to resist a bundle of quirky characters, exquisitely wrapped in absurdity and tied together by a string of ridiculous circumstances … in other words it’s a Wes Anderson film. 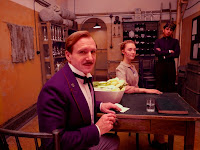 Perched high in the alps of Zubrowka sits the shining jewel of European hotels, The Grand Budapest Hotel. Under the watchful-eye and velvet-glove-encased iron fist of the world’s greatest concierge Monsieur Gustave H (Ralph Fiennes), the hotel proudly hosts the upper crust of European society. Many come for the views but most come for Monsieur Gustave. Amongst those drawn to the proverbial flame is Madame Desgoffe-und-Taxis (Tilda Swinton), an elderly widow who is both guest of the hotel and aged lover of Gustave. When she is found dead a short time after leaving the hotel, suspicions are aroused when Gustave is mentioned in her will, he is accused of her murder and so the craziness begins. The story is almost equal parts prison, heist and murder mystery tales with an overarching narrative looking at the mysterious owner of the hotel itself, Mr Zero Moustafa (Tony Revolori/F. Murray Abraham). The film also tackles the effects the impending war is having on traditional European culture. It's quite the melting pot of plots and ideas, which in the hands of a lesser story teller could easily have become a lumpy hotchpotch, but thankfully it’s not.

I referred to Anderson’s style as ‘dolls house’ filmmaking, because they tend to be set predominantly in single locations in which the camera is able to pan from room to room as if it’s outside peering in. The highly stylised set design and costuming adds to the feeling that the characters are merely toys in a play set for him. The locations in Wes Anderson films (consider the the family house in The Royal Tenenbaums, Steve Zissou’s ship The Bellafonte in Life Aquatic, Rushmore Academy in Rushmore, etc) effectively become characters themselves, given the way the occupants usually interact with them. In this film the hotel serves as a base of operations for the story and looks phenomenal. As always, Anderson unleashes his penchant for symmetry within his environments, especially when shooting within the hotel lobby. The entire lobby is mirrored against itself in a perfect example of the film's high calibre of design. Much like the Coen Brothers' films, there is a lot going on visually, but that’s one of the reasons why Anderson's films are immensely rewatchable: you simply can’t take them in all in one sitting. 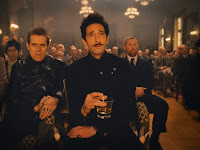 The film boasts an exceptionally large cast which the simplicity of the plot can not entirely support. Coupled with the fact that the story clips along at a breakneck pace, it started to feel a tad crowded during the final act. Nearly every Wes Anderson regular gets a few moments on screen, which, while fun to see, gets a little distracting; I started playing a game of who’s coming up next, checking them off like a shopping list. Despite that grumble, Ralph Fiennes is superb as the heavily perfumed Gustave, a role perfectly suited to Fiennes: rich in flowery dialogue yet beautifully self aware. The other standouts in the cast are mostly new to the Anderson scene, including Saoirse Ronan, Tony Revolori and Jude Law, who seem right at home in this world.

While this didn’t quite reach the lofty heights of Rushmore or The Royal Tenenbaums, The Grand Budapest Hotel sits comfortably within Anderson’s catalogue. I intend to watch it again very soon, just so I can find all the little easter eggs I missed the first time round. This is definitely a film worth catching in the cinema, so you have the biggest canvas on which to admire his work.

The Grand Budapest Hotel in opens in select cinemas this Thursday, if you agree or disagree with my thoughts feel free to drop a line below.