A Million Ways to Die in the West - Review

- May 28, 2014
Disclaimer: Due to technical reasons at my screening, we were unable to see the final thirty minutes of this film, but -- spoiler warning -- I still loved it! 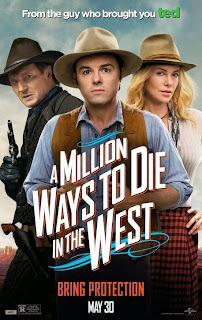 After the indisputable success of his directorial debut, Ted, which raked in over $540 million worldwide, I’d imagine Seth MacFarlane had free reign to make anything he wanted. It came as a surprise, however, when it was announced that he’d be making a western; no one really expected that. A Million Way to Die in the West is an entertaining assortment of oddball characters getting themselves into all sorts of trouble on the frontier, all woven together with that cheeky infectious charm that Macfarlane is known for.

Set in Arizona in 1882, local sheep farmer Albert Stark (Seth Macfarlane) has just been dumped by his girlfriend Louise (Amanda Seyfried), after failing to take part in a duel. Albert’s life is forever changed when he meets the mysterious Anna (Charlize Theron), who helps him find his much-needed confidence. Turns out, of course, that it’s in fact Anna who needs Albert’s help, when her past catches up with her in the form of her husband, Clinch Leatherwood (Liam Neeson), the roughest, toughest gunslinger in the region.

The opening credits are comprised of a booming score reminiscent of The Magnificent Seven theme, accompanied by some stunning landscape cinematography, setting the scene rather effectively, and very much paying homage to the golden era of westerns. For what is essentially a fairly crass comedy, it would seem that no expense has been spared (John Hammond style) in creating this world in a highly credible fashion. The set scenes look fantastic and fully realised.

The performances are so much fun; Macfarlane and Theron have excellent chemistry on screen, which at times reminded me of Bob Hope and Jane Russell in Pale Face. On more than a few occasions, it seemed like Theron was really struggling not to laugh at some of Macfarlane’s more outrageous lines. Macfarlane really impressed me with the physicality of his performance; with plenty of pratfalls and horse related stunts, it kind of reminded me of a Donald O’Connor or a young Steve Martin. However, as good as the leads are, this film belongs to the supporting players, namely Giovanni Ribisi (Edward), Sarah Silverman (Ruth), Neil Patrick Harris (Foy) and Amanda Seyfried (Louise). It takes certain actors to pull off the absurdity that Macfarlane creates. Luckily he’s assembled a crack-commando team prepared to do the unspeakable in order to get a laugh, and for that, I salute him. Neil Patrick Harris and Giovanni Ribisi are the absolute standouts. 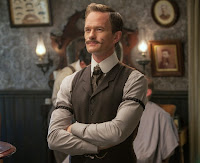 For lovers of Family Guy and Ted, the humour here is nothing new, in that it’s rapid fire commentary humour and exaggerated situations played out to within an inch of their comedic lives. I’m a huge fan of Macfarlane’s work to date and would suggest that he’s pushing the limits in terms of inappropriateness – but, hey, that’s what gets us in the door, right? There are several jokes which, quite frankly, I was surprised he had the guts to go with, so I’ll be keen to see what the general audience reaction is to some of this more challenging content. For me, this is funnier and far more daring than Ted. Without spoiling anything, there are some awesome cameos (one in particular which should give you a near fatal dose of nostalgia).

Although I may have been deprived of seeing the whole film, I can safely say that this is one hell of good time at the cinema and definitely worth getting out to see. A Million Way to Die in the West opens this Thursday in cinemas everywhere. If you see the film and agree or disagree with my thoughts, feel free to drop a line below.