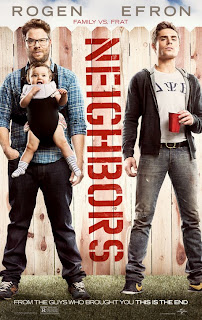 Bad Neighbours gives you the opportunity to sneak in some laughs before the louder Michael-Bay-esque nonsense-blockbuster films start stomping our way, yes Spider Man 2 I’m looking right at you! Over The past few years, it’s been fairly slim pickings on the comedic front, with arguably only five or six films leaving a lasting impression, namely Ted, Bridesmaids and 21 Jump Street. Now Bad Neighbours isn’t the second coming, but it’s an entertaining film which delivers more than it’s fair share of genuinely funny albeit juvenile moments. If you’re not offended by the odd vibrator, breast pump or venereal disease joke then this film could be right up your alley.

Mac and Kelly Radner (Seth Rogen and Rose Byrne) are new parents who have just bought their dream home and are slowly coming to terms with their newfound sense of responsibility. Their newly-built “grown up” world is turned upside down when a local fraternity moves in next door and decides to turn the joint into party central. After trying to reason with the frat president Teddy (Zac Efron), the two houses go to war, resulting in a series of practical jokes and revenge schemes. Despite all the shenanigans, the film takes a few moments to look at what exactly ‘growing up’ means, which shows a nice touch of self-awareness, given the target audience.

The film succeeds because of the cast. Although at first blush the idea of pairing of Seth Rogen and Rose Byrne caused me some concern, their chemistry won me over instantly. Thankfully, Rose Byrne’s character (through some very straightforward exposition) is allowed to keep her Aussie accent, resulting in a relaxed and natural performance. She proves yet again that she has plenty of comedic muscles to flex. Seth Rogen rolls out his usual schlubby-stoner schtick, but hey, it works for the guy.

The big surprise here was Zac Efron, who seems to be still finding his way in a post-teen-heartthrob kind of world. He’s got great comedic timing and even nails the more emotional scenes – all very promising for his career. The only problem (although the ladies would argue it’s no problem at all) is in the few of his performances I’ve seen of late he displays a penchant for going shirtless à la Mr McConaughey. Perfectly understandable for a man whose abs have their own abs, but I think he’s got more to offer. 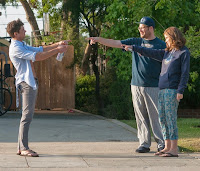 Director Nicholas Stoller is slowly building a solid comedic filmography, with Forgetting Sarah Marshall, Get Him to the Greek and The Five Year Engagement under his built. Whilst I had my issues with the latter, he’s quickly becoming a director whose releases I’ll go catch. I wish there were more directors that i felt this way about. He’s the type of director who wisely allows the laughs to come from the writing and the performances, shooting the scenes very simply (almost as if it were a television sitcom), which works because it’s not like we are expecting grandiose cinematography in a raunchy comedy.

By no means is this a high-brow affair but then few college frat-house themed comedies really are. It deals in equal parts absurdity, vulgarity and witty-self aware banter, which I think justifies the price of admission. Don’t take it too seriously and you’ll have a ball.

Bad Neighbours moves into theatres this week. If you see the film, feel free to drop a line below or come over to our facebook page.