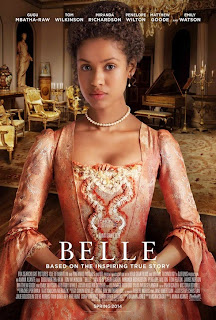 Belle tells the fascinating true story of Dido Belle (Gugu Mbatha-Raw) a mixed-race girl raised as an aristocratic in 18th century England. In a society which is heavily influenced by the economic riches of slave trading and its inherent racism, Dido’s story is incredible not only because she is raised in an aristocratic household, but that the house is that of her uncle, Lord Chief Justice, Lord Mansfield, (Tom Wilkinson) the most superior judge in all of England, who has power to influence views on slavery in his decisions in the Supreme Court. What follows is a story, most earnestly told, of Dido’s experiences growing up in English aristocracy and her striving to carve out a position of her own, in a society where position was everything. I just wish this amazing story could have been executed better.

The film establishes quickly that Dido originates from an impoverished home and after the death of her mother, she is plucked from these humble beginnings by her biological British Naval officer father, Sir Admiral John Lindsay (Matthew Goode). Herein lies my first disappointment. I’m rather fond of Matthew Goode and thought he was simply brilliant in the Australian film Burning Man and also gave solid performances in Stoker, A Single Man and The Watchmen...but here his Admiral Lindsay is soo earnestly good (no pun intended) and soo intensly benevolent, I became too aware of the "performance". I suppose his character is meant to echo in viewer’s mind as the first really decent person of Dido’s acquaintance, but it was a bit hard to watch. Sorry Matthew, better next time eh?

Once deposited in her uncle’s home, Dido joins a cast of English staple actors, including Tom Wilkinson (Michael Clayton, Eternal Sunshine of the Spotless Mind) as her uncle, the gentle Emily Watson (War Horse, Oranges and Sunshine) as his wife Lady Mansfield, and also Downton Abbey’s Penelope Wilton (The Best Exotic Marigold Hotel) as Lord Mansfield’s sister Lady Mary Murray . Also in the household under Lord Mansfield’s charge is his great-niece , Elizabeth Murray played by Sarah Gadon, ( A Dangerous Method, Cosmopolis) who has come from difficult circumstances herself. The two form a sisterhood and in comfort and happiness reach their late teens together and are on the brink of being introduced into society.

The Mansfield household feels a little bit “Downton” with plumby British accents, Wilton essentially her Downton character, over-exposition and very clearly, deliberately over-enunciated lines. It’s a breath of fresh air when handsome, direct, intelligent yet poor, apprentice, John Davinier, (Sam Reid, Anonymous, The Railway Man) arrives. He is passionate about human rights particularly those of slaves and debates with Lord Mansfield over The Zong Affair case, where 130 slaves were deliberately drowned by the crew and the ships’ owners are seeking an insurance payout. Davinier conveys details of the case to the sheltered but maturing and intelligent, Dido and he and the case leave a lasting impression.

Gugu Mbatha-Raw’s Dido is lovely. She is passionate, charming, beautiful with intelligent sparkling eyes and easy to rally behind as a heroine. Her challenges are great and become even more complicated once she is granted a large inheritance, an interesting twist for a woman already in such a unique position. Now she is rich, seemingly able to do as she pleases yet still restricted by her mixed-race origins. She is a true unicorn in this society and no one has any solid answers. The world is largely seen through her eyes and the use of pictures and paintings, particularly those depicting slaves or black servants is clever and illuminating. This insidious racism and it’s commonality has given Dido a phobia of representation, an idea I found very compelling and the film’s inspiration is in part due to an actual painting depicting Elizabeth and Dido together. Dido’s first encounter with a black servant who shows her how to tame her long and curly black hair is sensitively played and a lovely moment in the film. We also form affection for Elizabeth because we see her through Dido’s eyes, even though Gadon’s English-rose Elizabeth is a bit too winning, keen and rather silly.

Tom Wilkinson provides the Lord Chief Justice with the presence one would assume the real man would have in life although there are times where even Wilkinson falls into a caricature of himself and his usual, although admirable, gravitas. It is in Wilkinson, Mbatha-Raw and Reid and their performances and characters that provide relief from the over-played aristocratic world, especially once an incredibly arch Miranda Richardson (Damage, Enchanted April) as Lady Ashford and her dubious sons arrive, played by an enigmatic James Norton (Rush, Cheerful Weather for the Wedding) and extremely villainous Tom Felton (Draco in the Harry Potter series). By this stage we are practically begging for Dido and Davinier to escape the aristocracy and seek the back of a pub, somewhere the scenery has not already been chewed.

I was moved by Belle and entranced by Dido's particular story against the backdrop of a truly ugly and prolific racism. I would like to see more of Gugu Mbatha-Raw and wouldn’t mind some more of Sam Reid too since he oozes charisma as Davinier. There are period films that have dealt with a similar period to Belle and likewise, have complicated historical plot lines involving court cases like Amazing Grace and Amistad, I just wish that Belle was made with a touch more sophistication and subtlety like these films.

Belle is in cinemas on the 8th May. If you see the film, please share your thoughts below.