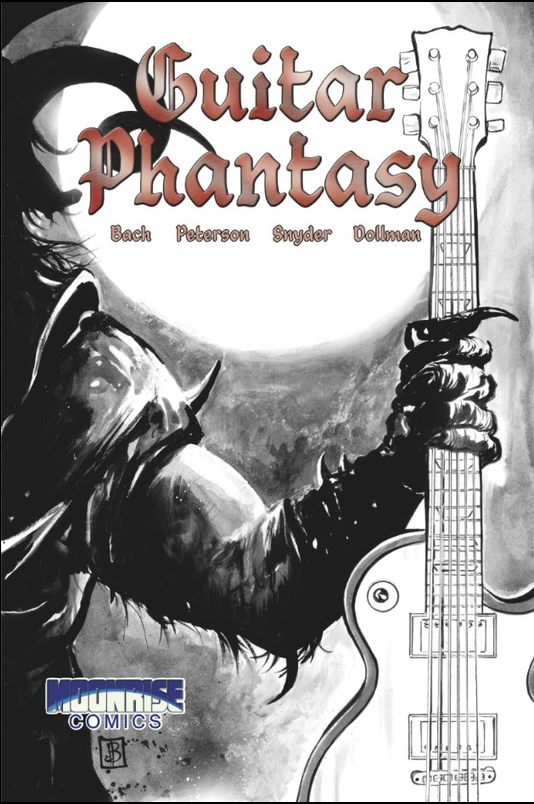 Taking cues from great fantasy stories such as Lord of the Rings and Conan the Barbarian, Guitar Phantasy from Moonrise Comics does the unthinkable: it channels the spirit of these and other such fantasy epics and crams it into eleven tight pages. Yep, you heard me, in a humble eleven pages, writer Tim Bach and artist Carl Peterson weave a captivating tale of foul demons, fair maidens (in guitar form) and long haired teenagers. It reads like a hero's ballad, looks like a metal album cover come to life and feels like Conan the Barbarian and Scott Pilgrim had a rocking love child.

The story follows Kevin, your stereotypical teenage boy, on a quest to defeat an ancient demon and prove himself worthy to wield the guitar Excalibur. It's a simple plot but within it lies the essence of all fantasy stories: you have a hero, an epic task and the eternal struggle between good and evil. Carefully mixed in with these traditional fantasy elements is the universal adolescent male fantasy of learning guitar and inevitably becoming rock-star. I think it's safe to say every teenage boy worth his salt at least attempted to learn the mythic six stringed instrument, even if most of us only got as far as the opening notes to 'Smoke on the Water'. What lays under the surface of this deceptively simple tale is a world of fantastical indulgence that wants to do nothing less than fulfil that fantasy of becoming a bare chested, long haired, rock god. 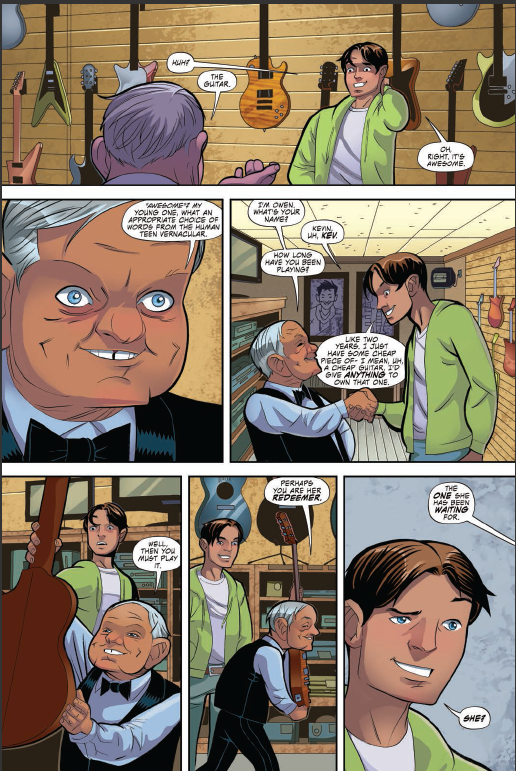 Bringing it all to life is the eye popping art of Carl Peterson. Think chunky and expressive lines with a very rock and roll sensibility. Seriously some of these panels look like they've been taken straight from a metal record, well minus the pentagrams. Peterson's line work is made all the better by Robt Synder's bright but moody colours that add a sense of danger and drama. Visually the whole thing reminded me of Tim Schaffer's Brutal Legend, and I mean this in the best way possible.

Tim Bach's writing really is the glue that holds it all together, taking Peterson and Synder's images and crafting them into a flowing and melodic story. Although present in the stories opening pages, dialogue is soon abandoned in favour of lyrical narration. This really lets the images speak for themselves, uninhibited by cumbersome speech bubbles, whilst the narration gently pushes the story along. Like the lyrics and chords of a killer rock anthem, the narration and images of Guitar Phantasy become beautifully entangled, the sum being much greater then its parts. 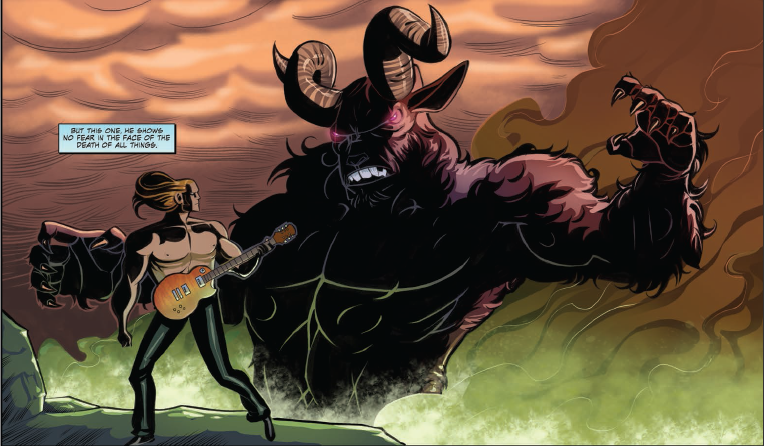 I was pleasantly surprised by how much I got out of Guitar Phantasy. For a short read, as I mentioned before it's around eleven pages, it packs a lot of punch. It's the little book with big nostalgia value, big ambition and an even bigger demon-goat thing. Although the stunning art was what initially grabbed me, it was the melodic writing that kept me from putting the story down. Seriously if you have a spare buck I highly advise you throw it Moonrise Comics' way and pick up a PDF of Guitar Phantasy.

Guitar Phantasy is available as a PDF from DriveThruComics, or from Indy Planet as a hard copy.