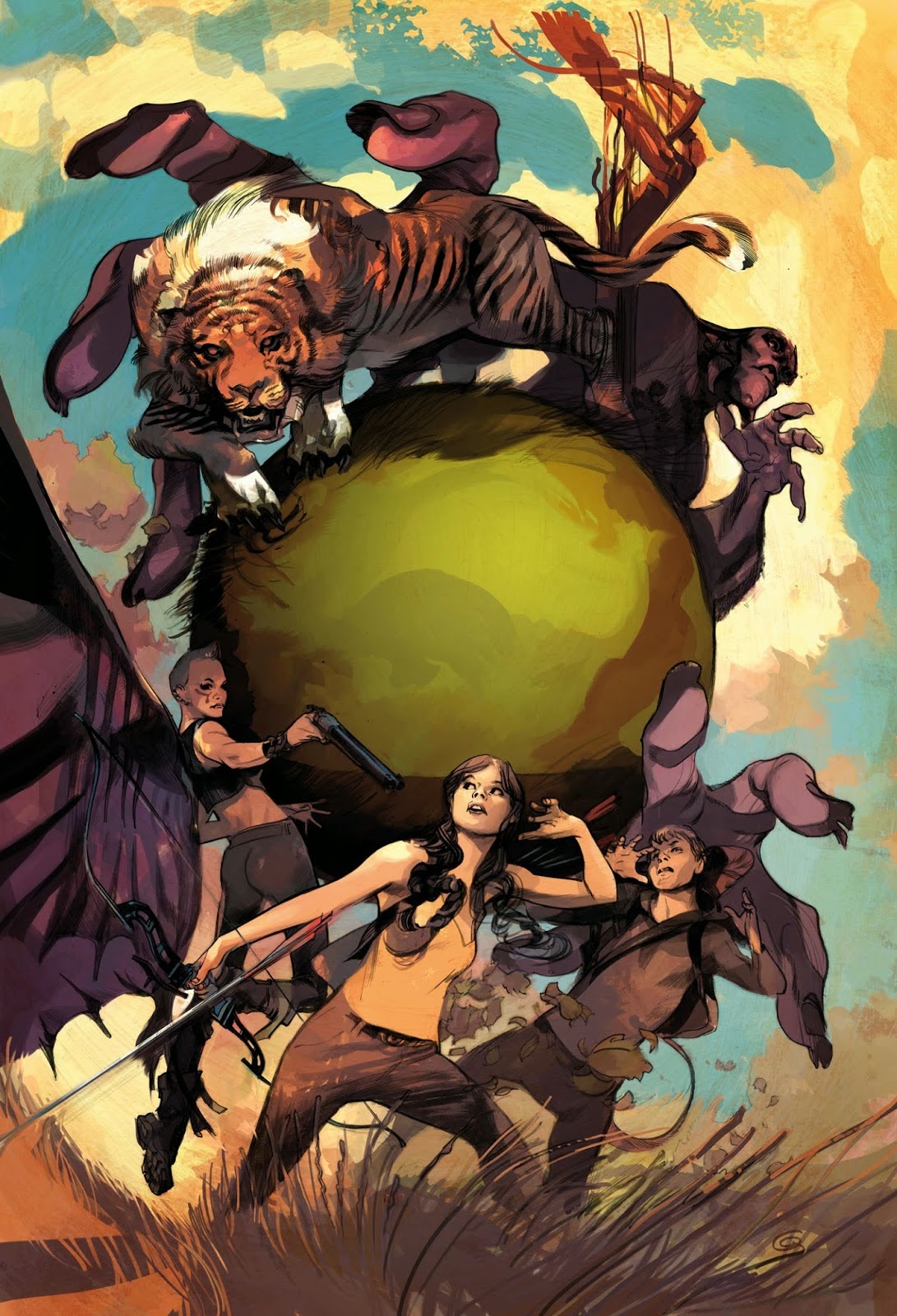 For those who like their fantasy alternative, there couldn't be a better time to be reading funny books. Series like Fables, The Unwritten, Rat Queens, and more recently Shutter all delight in mashing up the magical with the mundane. Minotaur taking public transport, a talking squirrel with a machine gun and magic rune-stones that double as mobile phones are all common sights in this emerging sub-genre. It is in this trend from which Hinterkind, a post apocalyptic fantasy tale written by Ian Edginton with art by Francesco Trifogli, is born.

After a mysterious disease known as the blight kills almost all of mankind, the forgotten races of myth and legend emerge from their hiding places to reclaim the world. Trolls, fauns, faeries, elves and a myriad of other fantastical races all reappear and are known collectively as the 'Hinterkind'. Understandably, these Hinterkind are pretty pissed off at us homosapiens for chasing them into the shadows in the first place with most being hell bent on humanity's extinction.

Large cities are now overgrown, looking more like the forests of fairy tales, if the forests of fairy tales had crumbling skyscrapers protruding from them. Humanity's surviving remnants live in small hidden communities within the larger ruined cities, hunting and farming to survive. These ingredients are by no means unique. The overgrown apocalyptic setting in particular resembled 'The Last of Us' and an apocalypse brought on by disease is certainly nothing new (once again this was also tackled in 'The Last of Us').

The story itself follows two teenage humans, Angus and Prosper, as they set out from their sheltered village in the middle of what was New York City, to see the world. There is some sub-plot about Angus wanting to find out why he has suddenly sprouted a giant mouse-like tail (yep you heard me) but it really just felt like a bizarre excuse to get our two heroes out into the world.

And this is where Hinterkind began to lose me. Beyond the premise, Hinterkind doesn't really have anything new to offer the avid fantasy reader. Prosper never really proved that she was anything more than a bow-toting Katniss rip-off and Angus failed to show any real personality. Although he does have a tail, which is kind of cool.

Which brings me to my second issue with Hinterkind, the art. Don't get me wrong Francesco Trifogli's art is great. It's sketchy, primal and gritty but it just felt wrong for the story that Edginton was trying to tell. The green post apocalyptic landscapes, ruined cities and mystical races call for an illustrator with a lush, delicate style. Trifolgli just isn't that kind of artist.

Hinterkind is by no means a bad book, it's got a solid creative team and a great premise, hell, all the ingredients for a great series are there but I never felt like Hinterkind was breaking new ground. It just covers old, well trodden ground with a fantasy overlay. Sure, a couple of years ago that may have been enough, but now, with a growing array of great alternative fantasy comicbooks on the shelves I can't in good conscience recommend this over something like Fables or Rat Queens.