- May 26, 2014
Christof and Billy start an all-new column featuring some of the choice Image Comics released this past week. Check them out below and tell us what you think as well! 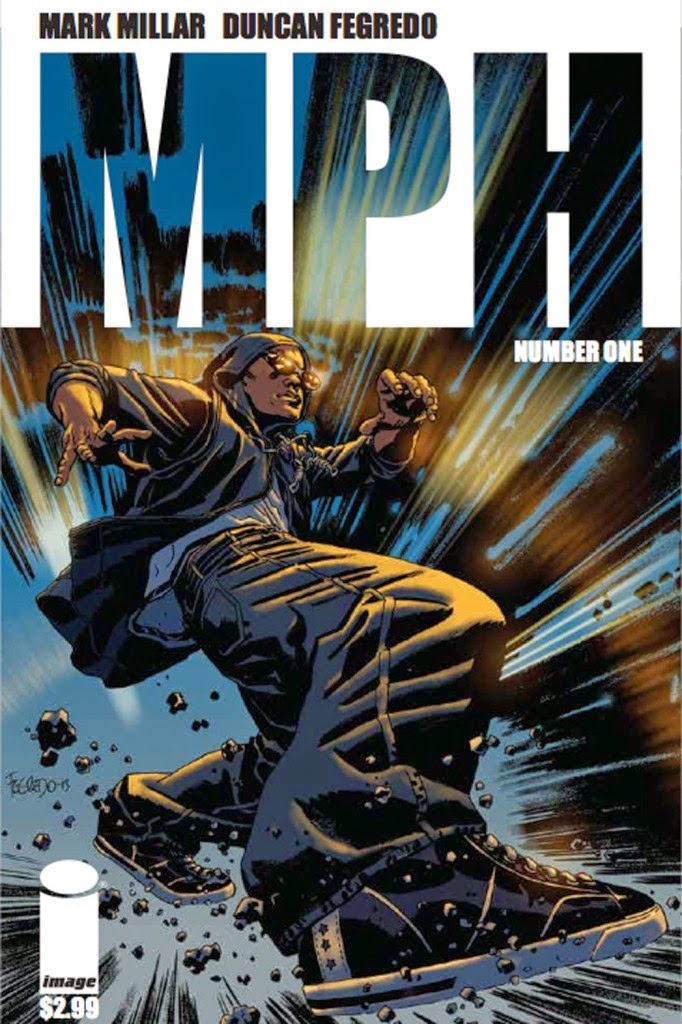 Christof: Mark Millar hasn't been shy about his intentions to create what he has dubbed 'The Marvel Universe for the 21st century'. Which of course involves drug use, gangs, gratuitous violence and lots and lots swearing. That's what all the cool kids are into right? And Mark Millar is nothing if not one of the cool kids.

The latest in his line of 'Millar World' books is MPH a story about a couple of down-and-out kids from Detroit who stumble upon a pill that gives them super human speed for seven days. This first issue very much sets it all up. We meet Roscoe, a likable and ambitious drug dealer who wants to make his money and then go clean. Well that is until his supplier sets him up and he lands in jail. Queue magic pill.

Although MPH #1 is your very much your run of the mill introductory issue it's certainly piqued my interest and quite frankly, it's good to see Mark Millar back at his prime. Oh, and his habit of working with some of the best artists in the industry hasn't stopped either. Duncan Fegredo's art is emotive, expressive and perfect for the tone of the book.

I'm pretty sure I say this every time I review something by Millar but I'll say it again: If you like Mark Millar's past creator owned stuff you'll really dig this. However, if you’ve never enjoyed a Millar comic then MPH probably won't win you over. That said, I really dug it and eagerly await the next issue.

It's not awe-inspiring. It's not paradigm shifting. It's Mark mother-flipping Millar. 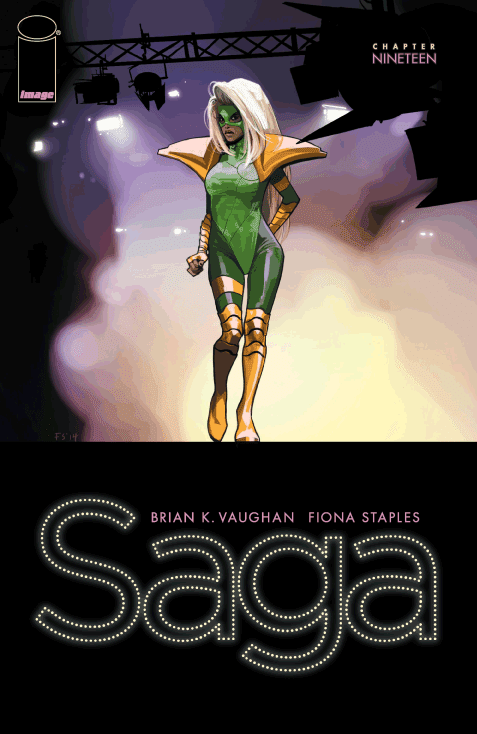 Billy: This week we have the first chapter in a new story arc for Saga released with Issue #19.

Saga is an epic Space Opera/Fantasy series written by Brian K Vaughan and illustrated by Fiona Staples. It’s about two lovers from different worlds, Alana and Marko, whose people are at war with one another. The war has spread out to the rest of the galaxy with various races remaining neutral or choosing a side. Alana and Marko are on the run from both their races with their daughter Hazel (who also partially narrates the series) who was born in the 1st issue of the series.

Hazel’s use as a narrator for the entire series is a great tool at fleshing out the story. It also works really well on a comedic level, as well as a tease for things in the future.

The current story arc has the family living on the planet Gardenia after the events of the previous story arc. Alana is acting in the underground entertainment program call the Open Circuit, while Marko is a stay at home dad. Hazel is now a toddler, walking and talking in that oh so cute way that toddlers do.

Throughout each story arc we’ve seen the characters grow physically and emotionally as the plot moves forward and tackle a wide range of topics. This story arc is no exception as Vaughan lays the ground work for what looks to be a heavy dramatically excerpt in the next stage of this intergalactic families life. I don’t want to spoil anything, but I think I might need a box of tissues for this story arc.

Staples’ artwork continues, as always, to be amazing. Each panel is a breathtaking, with line work showing the emotion of each character, vibrant gorgeous colour work, and highly imaginative designs.

Issue #19 of Saga as always delivered some twists, while keeping me curious and anxious about what is to come with these characters I have watched grow up. 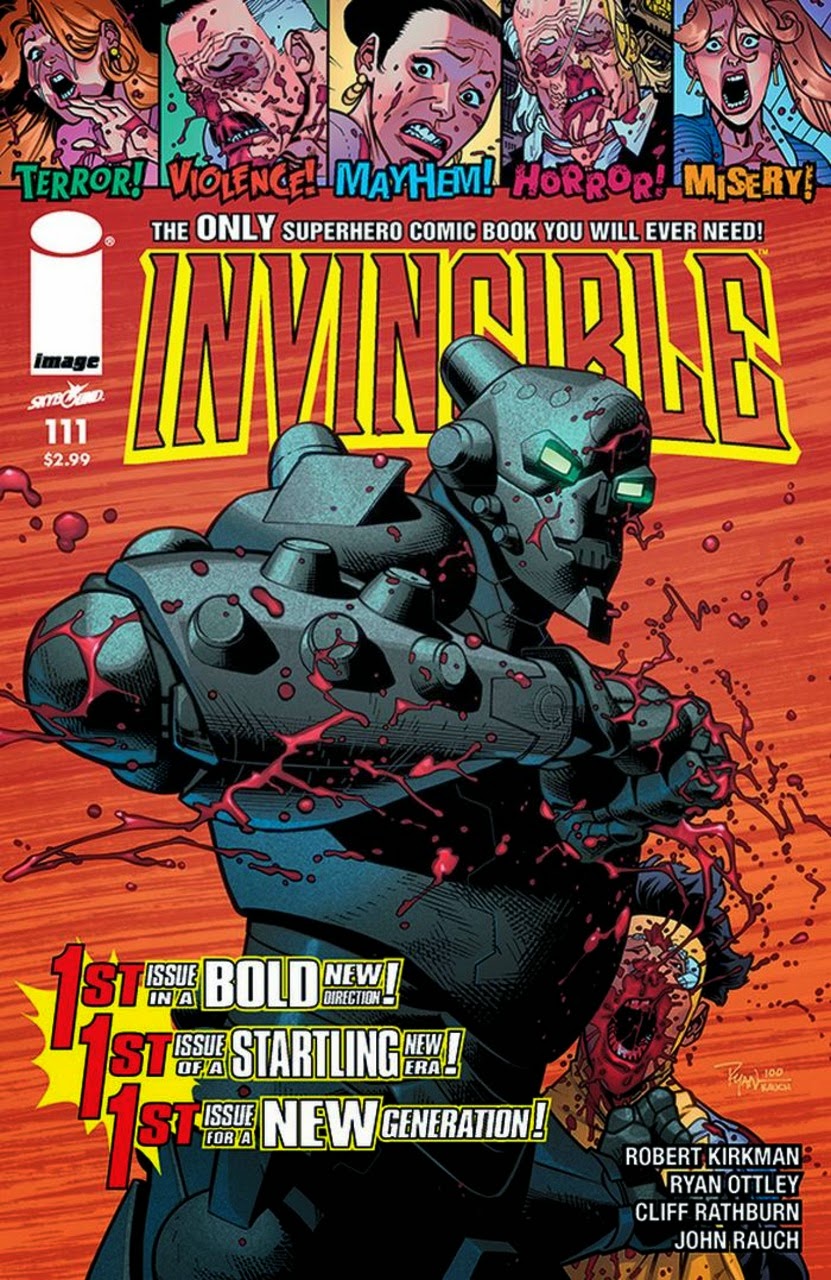 Christof: Robert Kirkman and Ryan Ottley are the masters of long form story telling. 111 issues in and Invincible still feels fresh to me. I’ll admit after issue 100 things slowed down, possibly even lulled a bit. Nolan became King of the Viltrumites, Eve got pregnant, even Monster Girl and Robot got back together. Just as everything was coming up Milhouse issue 108 happened and completely changed the status quo.

Although this isn't the first time Invincible has gone, or claimed to be going, in a 'bold new direction', this latest issue certainly shakes things up and brings Robot's intention’s for world domination into the limelight. After seeing Invincible take on an array of muscle bound goons for the last couple of issues, including alternative versions of himself, I'm looking forward to what will hopefully be more of a battle-of-the-minds type affair between him and robot.

Invincible #111 is not perfect by any stretch of the imagination but it is a very solid issue. If you like your superhero comics verging on the side of soap opera then I highly recommend you pick this issue up (although some catching up may be required!).