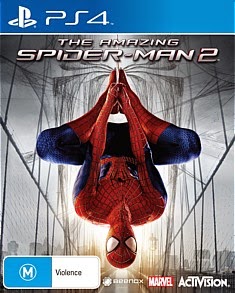 Luckily for me, and for this game, I'm a Spidey fan. Spidey has been my absolute favourite since I was a wee chap. Whether it was his wise-cracking nature or everyman demeanour, there was just something that drew me to ol' webhead. So unless this game had absolutely no redeeming qualities, there's a good chance that I'd enjoy it.

Swinging around the city is fun, and is probably one of the best things about the game but even that has its issues. The camera has a tendency to bug out (pun intended), particularly when you transfer from web-slinging to wall-climbing. There's nothing particularly new about the web-slinging aspect of the game and while issues may be present, it's certainly not a deal breaker. The fight system too is treading old ground with a semi-free flowing dodge/attack platform which is somewhat like the Batman Arkham franchise although not as polished. Even the forced stealth missions feel somewhat Arkham-esque but never quite hit the mark and wind up being annoying instead of thrilling.

This certainly isn't a next-gen game but still presents an eye-pleasing quality, graphically speaking. The best looking element in the game is Spider-Man's various suits which longtime fans will probably get a real kick out of collecting. I won't spoil the fun of discovering which suits are available, but needless to say that there are some very good looking recent suits and equally impressive throwbacks to years past. On close inspection these suits may display a little bit of pixelation along lines in the suit but in the heat of battle it's not particularly noticeable. As you climb to the roof of the Daily Bugle or Oscorp Tower, it's great to drink in the view from atop and while the draw distance isn't fantastic, you can certainly make out a reasonable are of the map before leaping off to explore. The lighting is pretty convincing as well, particularly in low-light or at night time, however, in full sun New York looks rather lifeless, as though everything is made of cardboard.

As with previous Spidey games, the real thrill is in collecting various comic books, statues, discovering a rogues gallery of villains and as stated  before, costumes. For this reason, The Amazing Spider-Man 2 presents itself foremost as a game for fans of the franchise and not necessarily for everyone. While I really enjoy this aspect, being a lifelong web-head, it doesn't bring anything new to the table and pales in comparison to the likes of the Arkham franchise which is arguably the pinnacle of comic book related video games.

The Amazing Spider-Man 2 isn't for everyone and brings nothing new to Spidey's arsenal but Spidey fans will definitely get a kick out of the completionist aspect and a number of pieces of dialogue which makes reference to canon from the Spidey books (such as Kraven referring to his wayward brother). The story has a tendency to be a slave to the games ultimate goal which seems to be the introduction of as many characters as possible. Again, as a fan, I didn't mind this aspect so much but it seriously hurt the underlying story which was, at times, barely there.