Assassin's Creed Unity Announced for October 28 in US

Announced during the Ubisoft E3 panel, Assassin's Creed Unity has been announced for release on the 28th of October 2014 in the US on PS4, Xbox One and PC. Interestingly, no mention of Xbox 360 nor PS3.

Preorders are already being accepted on the Ubisoft Online Store and Amazon with details for the Collector's Edition also announced. Ubisoft have consistently  released great quality collector's editions and this one looks equally as awesome.

As yet there's been no announcement regarding an Australian release date but we've reached out to Ubisoft Australia for clarification.

EDIT: The following Ubisoft Australia press release indicates that the previously stated release date will include Australia and New Zealand.


Assassin’s Creed Unity is being developed by the veteran Assassin’s Creed team in Ubisoft Montreal with support from nine Ubisoft studios around the world*. Set in a once-magnificent Paris, Assassin’s Creed Unity plunges into the terror of the 1789 French Revolution and features the most dense and immersive Assassin’s Creed city ever created. Through the streets of Paris, the starving inhabitants are set to take up arms for freedom and equality. In this time of chaos and brutality, a young man named Arno, wounded by the loss of those he loved, sets on a deadly path of redemption. Arno’s pursuit throws him into the middle of a ruthless struggle for the fate of a nation, and transforms him into a true Master Assassin.


Assassin’s Creed Unity reinvents the franchise, starting with the core game-play pillars that have defined the series from the beginning: navigation, stealth and combat. Players will carve their way through a stunning, full-scale open-world Paris, thanks to the power of the new Anvil engine, rebuilt from the ground up for new generation consoles. Assassin’s Creed Unity gives players full control parkour mechanics, a reinvented fighting system for a richer combat experience, a new stealth mode, cover system and crowd manipulation techniques. Players can channel their inner Assassin, customising weapons, equipment, outfits and specialised skills to match their play style.


In addition to the sprawling single-player campaign, players can join with up to three friends and take part in story-driven online co-op missions designed specifically for Assassins to play together. Skills and unique gear acquired in the single-player missions will be accessible in co-op and will define a player’s personalised Assassin’s style, whether emphasising brute force, agility or stealth. Players also will select a unique co-op skill that will help the team survive, evade or fight more effectively to the benefit of the team.


Players who pre-order Assassin’s Creed Unity will receive two bonus offers. The first is an exclusive single player mission, The Chemical Revolution, offering 30 minutes of additional game-play. During this mission the player will help Lavoisier, the "Father of Modern Chemistry", to escape from his kidnappers and recover his poison bomb formula.


In addition, players who pre-order via the Uplay shop or at EB Games will access the exclusive Unite pre-order program. By entering their unique pre-order activation code on www.assassinscreed.com/unite, players will have access to additional rewards by creating a team and inviting up to three friends. For more information on Unite program, please visit: http://assassinscreed.com/unite.


Also available are the Notre Dame Edition, exclusively available at EB Games and including the Arno Gargoyle figurine with other bonus content, and the Bastille Edition including the Artbook Soundtrack, lithographs and in-game content in an exclusive Jumbo Steel case. Pre-order at JB Hifi to receive 2 exclusive ULC’s.


Two unique Assassin’s Creed Collectibles will also be available across in Australia and New Zealand. A new high quality figurine, The Fearless Assassin, featuring Arno, includes bonus in-game Fearless Assassin Outfit and will be exclusively on sale from October 14. The second premium collectible is a life-size replica of Arno’s new signature weapon, the Phantom Blade. Designed by the award-winning McFarlane Toys, this limited-run collectible will be available on October 28. 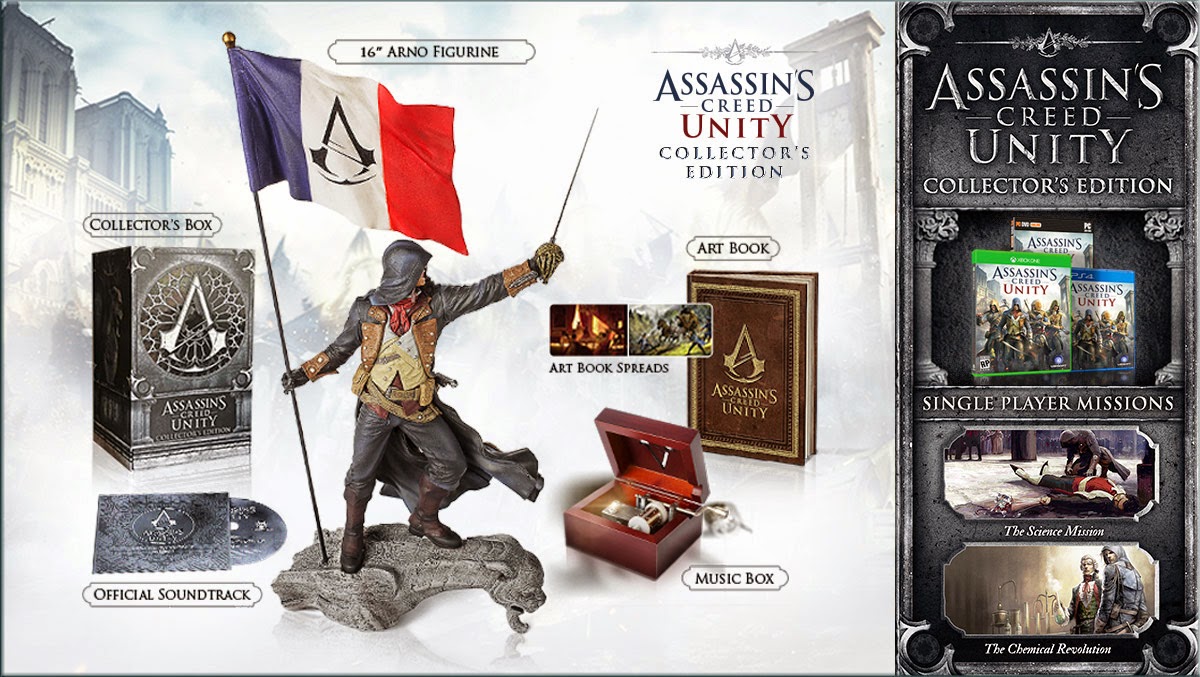