Tom Cruise is arguably at his best and most likeable in sci-fi action films. I love a good Tom Cruise sci-fi and Edge Of Tomorrow is no different, delivering a satisfying journey which is chock full of thrills with an overall sense of fun. Minority Report was brilliantly thought-provoking and emotionally affecting, Equilibrium was a pleasant surprise with some engaging new concepts and visions of a future dystopia and Edge Of Tomorrow is like a sci-fi cross between Groundhog Day and Saving Private Ryan, with a hero who keeps on perishing and “resetting” his day. 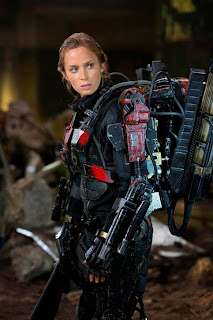 An important aspect to enjoying these "repeating" scenario type films is the element of surprise, so without telling too much, Edge Of Tomorrow takes place in a futuristic world war. Most of Europe has already been seized and the Americans, British and we assume other countries are allied once again as the United Defence Force, but this time they are fighting an alien enemy called Mimics. The film follows Major William Cage (Cruise) as he is pressed into fighting in a battle on the front lines of a beach in Normandy, France, where all hell breaks loose and he is killed … only to have his day reset, starting again the day before at base camp before flying out to battle on the beach again.

Like with the best of Doug Liman’s films, The Bourne Identity, the action in Edge Of Tomorrow is thrilling and well orchestrated. The beach battle scene is very much like the scene in Saving Private Ryan, except we have soldiers in heavy, mechanised armour fighting scorpion-like aliens. You get a real sense of the orientation and geography of the battle without the cameras throwing you around too much. There is a physicality that comes across with Cruise's action scenes, obviously coming across from his love of performing stunts himself. It is really refreshing to watch action films where you get a sense of actually feeling the effort and some of the pain. The editing of the film is also very clever. You enter into these “repeating” scenario films expecting to have to deal with fair load of repetition but Edge Of Tomorrow breaks about midway, revealing that we don’t know all the times that Cage has reset and it’s a welcome feeling to be thrown back and engaged with the territory of unknown plot points. 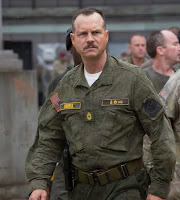 Maybe Tom Cruise is more appealing in his sci-fi roles because he has to take a step back from being Mr Ultra Cool and Confident. I get sick of that guy and it feels too close to the coolly, immaculate public-persona Cruise. In a Tom Cruise sci-fi he is more natural, a fish out of water and struggling to deal with his situation and surroundings. In Edge Of Tomorrow, we get this plus something new for Cruise. US Major William Cage is essentially just a PR media figurehead and no real soldier at all, in fact he’s a coward. The role really suits Cruise and allows him to display some spin-doctor suave as well as relatable weakness and fear, better still he’s also funny. There are some real laugh-out-loud moments in Cage’s journey to master his one day and it’s a welcome addition to the usually, very serious Tom Cruise sci-fi. It's like Tom Cruise is your video game character, continually making the wrong move in the game, getting knocked off in often amusing and stupid accidents and then resetting to the start of the level, which is very fun to watch. The best scene is watching him attempt a commando roll on a military base, with rather hilarious results. Eventually we get action man Cruise but I enjoyed the journey from un-coordinated, cowardly klutz to human extension of a machine gun. 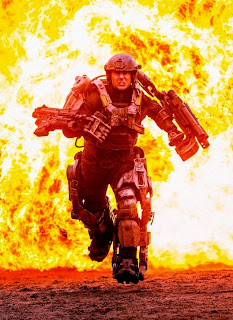 Emily Blunt (Looper, The Adjustment Bureau) is excellent and convincing at playing professional, battle-hardened soldier Rita Vrataski. Vrataski is a dame who will accept no rescuing and has a few names which people call her, the nicest of which is “The Angel of Verdun” after her pivotal win in a battle against the enemy. She is a kick-ass, formidable, lean piece of warrior muscle with intelligence who provides much needed support to Cage. The film also features solid performances from an amusing Bill Paxton (Apollo 13 , Aliens) as a puffed up philosophy-spouting Sarge and Brendan Gleeson (The Guard, Harry Potter) as a very stern, unpredictable general. The rest of the cast, including Noah Taylor (Game Of Thrones, Red Dog) as a doctor and all the infantry of J-Squad are an oddball group of the slightly screwed loose. They are rather funny but you don't feel much for them.

The action, battle scenes, aliens and European locations look fantastic. The aliens have a unique look, and reminded me of the scorpion-like Transformer in the first Transformers film crossed with Edvard Munch’s painted figure in “The Scream” yet are way cooler. The battle torn beach and ravaged Paris in particular are awesome vistas. The 3D viewing experience is without the usual gimmicky tricks and was very smooth and clear without the blurriness you so often get with heavily layered scenes in 3D.

All in all, Edge Of Tomorrow is a thoroughly enjoyable and thrilling sci-fi action flick that you can enjoy in full 3D cinema extravagance. My only qualm is that it is not as thought-provoking or gritty as I personally prefer my sci-fi and yet I still had a blast.

Edge Of Tomorrow is in cinemas Thursday 5th june. If you check it out, please share your thoughts below and tell us what you think .