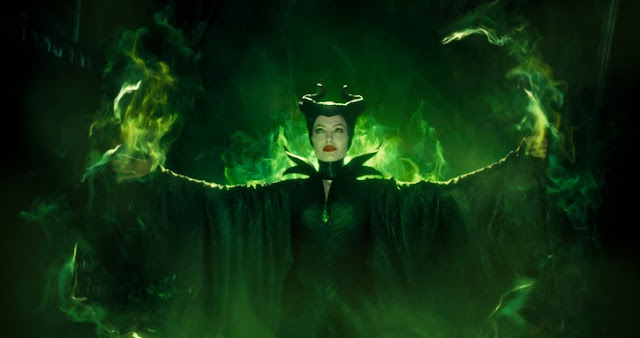 Maleficent can only be described as a clumsy attempt by Disney to pull the old switcheroo with one of their iconic villains. I’m trying to pinpoint when it started, but villains nowadays seem to require sappy back stories about when they were actually good guys, who through some kind of personal tragedy turned to evil. Needless to say, Wicked has been arrested and is currently being interrogated. Maleficent is a frustrating kind of affair, in that Angelina Jolie is so deliciously wicked; I wish she had a better sandbox of a film to play in. Sadly this falls closer to Snow White and the Huntsman when it needed to be Pan’s Labyrinth.

Billed as “The story you never knew” behind Sleeping Beauty, Maleficent is set in a far off land which is divided rather crudely into the worlds of men and magical critters. We meet Maleficent, a fairy child who pretty much frolics about, appreciating the wonders of life and generally being a super-positive pain in the ass. Her world is forever changed when she meets Sebastian, a runaway lad from the human world. Despite being from different worlds, the two fall in love and get with the making out (still not sure about the cross-species stuff). Maleficent is crushed when Sebastian turns out to be a less-than-savoury chap, who eventually savagely attacks Maleficent leaving her physically and emotionally violated. Maleficent has apparently no choice but to morph into the evil Queen that we know and love, wreaking havoc on all mankind.

This is Robert Stromberg’s directorial debut and sadly the film feels aimless for the most part. Since Stromberg has a long career in visual effects, it’s possible his influence bled into the film by way of the action set pieces which looked great, sadly though they were let down by the relatively weak connective tissue that is the plot. Given that this is no more than a CGI extravaganza from Disney it’d take a far stronger director to leave much of a lasting impression. Hopefully Stromberg gets a smaller film to show off what he is capable of.

Angelina Jolie steals the show with her performance as the Evil Queen. Those razor sharp cheekbones of hers seem almost genetically engineered for this film. I’m struggling to think of any other actresses that could have brought what Jolie did to the character. She’s menacing yet at the same time delivers the trickle of warmth that is required. Sharlto Copley, who unfortunately drew the short straw when it comes to character growth, does what he can with the one dimensional King Stefan. Elle Fanning is passable as Aurora (Sleeping Beauty), yet doesn’t appear overly challenged by the material. All of the performances are left in Jolie’s wake, which is both testament to her efforts and a slight on everyone else.

Ultimately this felt like a misstep for Disney, who of late have been rekindling that magic of yesteryear with their other offerings (Frozen, Wreck It Ralph, etc). This isn’t exactly a bad film, it just falls well short of what Disney has been producing of late. I wish Disney poured the resources into establishing a new franchise rather than tinkering with a classic.

Maleficent is currently in cinemas. If you see the film and agree or disagree with my thoughts feel free to drop a line below.