One of the most iconic and enduring cartoon franchises of the 1980s, Transformers and its accompanying universe is as vast as it is awesome but due to its immensity it can be difficult to know where to start.

Sure, you could just start with Gen 1, Season 1 but where to from there?

Unfortunately, not all Transformers series take place in the same universe or continuity so there's no hard and fast rule,  but we've consulted with the mech-heads at Madman and put together a handy dandy recommended viewing order for their Transformers releases and 100% Bay-free. 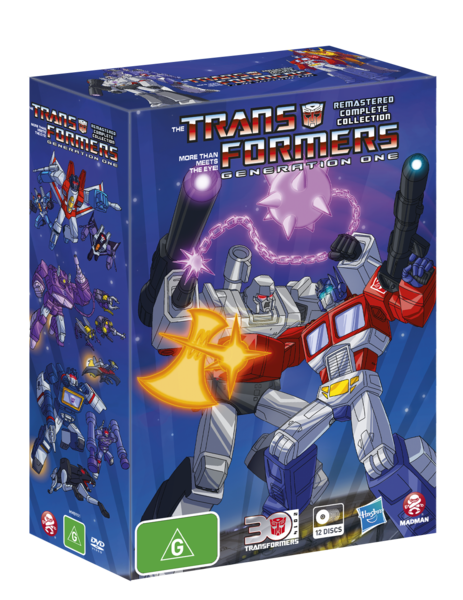 This is where it all began, way back in 1984. This was our first introduction to Optimus and the gang who found themselves stranded on "present day" Earth. Also introduced are the majority of main characters who still exist today including Soundwave, Starscream, Megatron and everyone's favourite dim-witted Dinobot, Grimlock.

Season 1 weighs in at a meagre 13 episodes long!

Season 1 is included in the Transformers Generation 1Remastered Complete Collection.

In an attempt to get syndicated on US television, and also riding on the overwhelming success of the first season, The Transformers was expanded to a 49 episode second season.

The second season introduced a whole swag of new characters but seemed to lose some of its storytelling focus and opted for episodic stories instead of multi-episode story arcs.

Season 2 is included in the Transformers Generation 1Remastered Complete Collection.

Featuring some awesome animation (for its time), Transformers: The Movie was set in THE FUTURE (2005) and introduced even more characters to the Transformers lineup. These characters managed to make a bit more impact than Beachcomber from season 2. The movie introduced just as many characters as it killed off, including Hot Rod, Ultra-Magnus, Galvatron and a cybertronian version of Galactus named Unicron.

A product of its time, the movie features the voices of Eric Idle, Judd Nelson, Leonard Nimoy, Casey Kasem and Orson Welles as well as the brilliantly 80s power ballad "The Touch" by Stan Bush.

Transformers: The Movie is available on Blu Ray and DVD from Madman.

Of course, more new characters are introduced including the city-sized Metroplex, while a fan-favourite character returns to the fold.

Season 3 is included in the Transformers Generation 1Remastered Complete Collection. 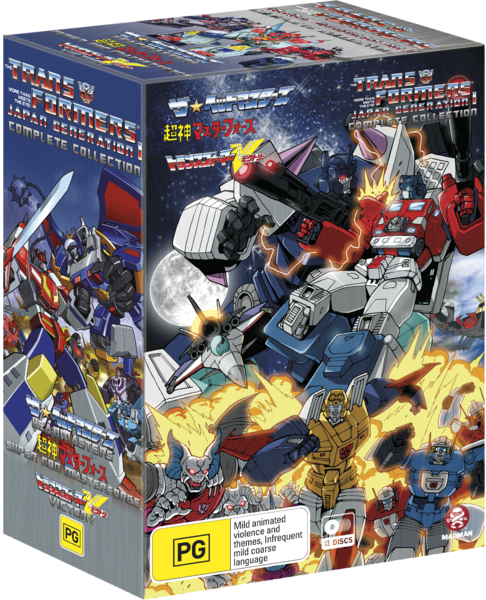 At this point the Japanese and American story lines split with season 4 being the American continuation while in Japan, Headmasters began. So at this point it's really up to the individual as to how you proceed.

Season 4 consists of only 3 episodes and completes Transformers in the West... for now.

Headmasters, on the other hand, continues where season 3 finished and introduces a whole new cast of characters while still retaining a few old favourites.

Also known as Super-God Masterforce, this series takes a slightly different tact and sees humans take on the Decepticons who, in an effort to take on the puny humans on their level, shrink to human size. What? Why not grow bigger and just step on us?

While it may seem like an odd statement, having humans play a larger role in a Transformers series works well and increases the stakes immeasurably.

Masterforce is available in the Transformers Japan Generation 1 Collection.

The final Generation 1 incarnation, Victory is very animo-ish in the way that it focuses much more on action. Instead of just turning into a machine, or robot, Transformers now change in a more grandiose fashion with special effects and heroic poses, much like series' like Voltron or Power Rangers.

Victory is available in the Transformers Japan Generation 1 Collection. 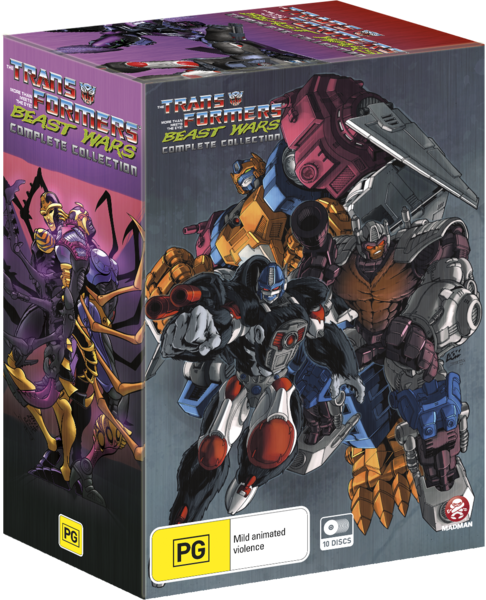 Finding themselves stranded on a seemingly prehistoric planet, the conveniently named Maximals and Predacons use animal form instead of that of vehicles to avoid "stasis shock". Sure, it's a thinly veiled excuse for a new toy line but it worked.

Beast Wars follows the American timeline and ignores all of the events of Headmasters, Masterforce and Victory.

Beast Wars is available in the Beast Wars Complete Collection.

The first series in the awesome "Unicron trilogy" and an all-new continuity, Armada looks a lot less cartoony than the American generation 1 and really takes on an anime aesthetic. Each of the characters look far less utilitarian but more stylised.

Many old favourites are back but not how you remember them and a whole swag of new characters arrive as well, particularly the power-enhancing Mini-Cons.

Armada is available in Transformers Armada Collection 1 and Collection 2.

Part two in the "Unicron trilogy" and following on from the shocking finale of Armada, Energon brings a slightly different style to the table with CGI, cell-shaded robots. Energon follows a particularly heavy plot with an underlying story which promises to be an epic conclusion in the forthcoming series, Cybertron.

Introducing a cast of new characters, and re-introducing some old faves, the mid-point of the Unicron trilogy is pure, unbridled Transformery gold!

Energon is available in Transformers Energon Collection 1 and Collection 2.

Following on from Energon, Cybertron is the final part in the "Unicron trilogy". Again utilising a blend of hand drawn animation and CGI rendering for vehicles.

With Cybertron under threat, all Cybertronians are relocated to Earth where they take the shape of vehicles and befriend a small group of humans who lead the bots to the Cyber Planet Keys, artefacts which will unlock the greatest secret in Transformers history.

If Transformers Animated looks like something made by Cartoon Network, that's because it is! Another reboot of the franchise, this series again finds the Autobots stranded on Earth but this time they start off fighting random bad guys instead of Decepticons.

But never fear, the Decepticons turn up eventually and action ensues. While all Transformers series are kid friendly, this one is particularly so yet still manages to delight us big kids as well.

Transformers Animated Season 1, Season 2 and Season 3 are available on DVD.

Ok, I may have said that this list would be completely Bay-free but this series kinda/sorta breaks that promise. Although Prime isn't strictly born of the Bay universe, the films writers Robert Orci and Alex Kurtzman return to the Transformers franchise as developers of Transformers Prime. This predominantly CGI animated series bears many a physical resemblance to the Michael Bay films but is actually from the same universe as the video games War for Cybertron and Fall of Cybertron. Although not strictly a part of previously established canon, the characters in Prime make quite a few comments regarding the events of previous series'.

The Season 1, Season 2 and (parts of) Season 3 of Transformers Prime are available on DVD and Blu Ray.

So, what are you waiting for? Now you know where to start with your Transformers binge. As you can see above, apart from the overlap of Gen 1 and Victory, and the semi-stand alone Unicron trilogy, you're pretty well free to watch any of the series in any order. For ease of reading, here's a recap of the optimum, or should I say Optimus, viewing order: