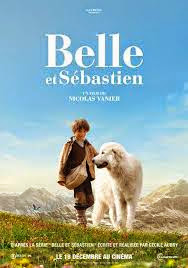 Belle and Sebastian, the latest film from Nicolas Vanier, has all the nourishing warmth of a bowl of hearty stew in the depth of winter. It has a wholesome charm that is very welcome in this season of super-sleek blockbusters, and serves as a timely reminder of why it’s worth getting out to see the smaller flicks which sadly never seem to hang around quite long enough on the big screen.

Set during the second World War in a picturesque village nestled in the French Alps, this is the simple story of Sebastian (Félix Bossuet), a spirited young farmhand under the care of world weary farmer César (Tchéky Karyo), who befriends a gigantic stray dog suspected by local villagers of preying on their livestock. The two form an inseparable bond which leads them on many adventures in the surrounding countryside. While Sebastian and Belle are frolicking about, the village is dealing with the increasingly intrusive actions by Nazi soldiers, who are attempting to uncover agents within the village responsible for smuggling Jewish refugees into neighbouring Switzerland.

Eric Guichard’s cinematography is superb; he is equally capable of capturing a majestic mountain-scape as he is the frivolity of the woodland creatures who dwell amongst them. It actually reminded me of the Disney live action classics which seemed to be part nature documentary and part narrative film. Images of nature were woven beautifully throughout the film, as if Vanier was making some kind of comment about mankind’s blindness to the beauty around them, as the war rages on in their lives.

In terms of performances, Félix Bossuet is the true standout, which is remarkable given he’s so young. He really holds his own amongst his seasoned counterparts. Tchéky Karyo is fun as Sebastian’s carer, who despite his gruff exterior has Sebastian's best interests at heart. Other notable performances include Margaux Châtelier as the strong-willed Angelina and Andreas Pietschmann, who plays the resident Nazi bad guy; luckily he is at least able to bring some charm to what otherwise could have been a one dimensional character.

This is a great Sunday afternoon film when you’re looking for a something that’s got a sprinkling of everything. The scenery alone is honestly worth the price of admission. This is a sweet little film which I hope you’ll make the effort to get out and see.

Belle and Sebastian hits select cinemas this Thursday, if you see the film and agree or disagree with my thoughts drop a line below.