This is not Scott Pilgrim.

I have to be clear up front about this. Yes, it’s got the same writer and employs the same art style. Apart from that, little connects that series and this tale right here. If you came here for something even vaguely connected or reminiscent of that memorable run, try elsewhere.

Oh, alright, there’s a reference to bread making you fat and a character reacting incredulously, but afterwards that’s it. Swear.

Seconds is the first standalone graphic novel by Bryan Lee O’Malley since 2003’s Lost at Sea. The book follows burgeoning restaurateur and professional smartarse Katie as she discovers her first restaurant is actually home to a strange blonde girl in thrift store clothing who offers her a magic mushroom (no, not that kind). Basically, if Katie ingests the mushroom, scribbles a mistake she’s made on a special pad and goes to sleep, she’ll wake the next morning to find the mistake altered and her past shifted in order to fit its absence. Naturally, she begins abusing her continuity more flagrantly than a certain comic company’s rebooting efforts, and since the space-time continuum doesn’t especially like being abused it leads to very not good things occurring.

While it’s not as frenetic and highly-charged as its six-book predecessor, Seconds still has a similar kind of humour and possesses a more grounded tone in rooting itself in a contemporary setting with minimal fantasy elements for most of its page count. There’s a meta awareness and lightness of tone in Katie conversing with her omnisciently-present narrator that juxtaposes well with the serious beats the book executes, though the latter expectedly takes over a bit more when Katie’s Faustian pact begins to tear at the seams towards story’s end.

I really appreciate Seconds not so much for the Aesop it engenders or the moral posturing that wanting a do-over leads to shenanigans, but for its smaller moments that tell us it’s ok to stuff up. It’s alright for you to fight with your significant other, as long as you love them at the end of the day. It’s not the end of the world if you get a co-worker ticked off through an inappropriate choice of words, as long as you apologise after. It’s fine if you make a bad decision when deciding to build your next restaurant inside the decaying husk of a Gothic hovel underneath a bridge that is guaranteed to rake in zero customers, as long as…

Actually, no, just stick with the first two.

Though I enjoyed Seconds as a layered tale entertaining both sarcasm and seriousness in equal measure, it’s the kind of book whose representations of both the coin’s sides will either be engaging or just grating. The humour does owe a lot to the “younger”, snarky form of comedy Scott Pilgrim employed (and if you’re not keen on jokes leaning on the fourth wall then that comedy will get old quickly), and the drama can get overwhelmingly dark at times that it causes a bit of emotional whiplash. While I enjoyed O’Malley’s execution of both, sometimes simultaneously, those not keen on diametric shifting between pages might be turned off. 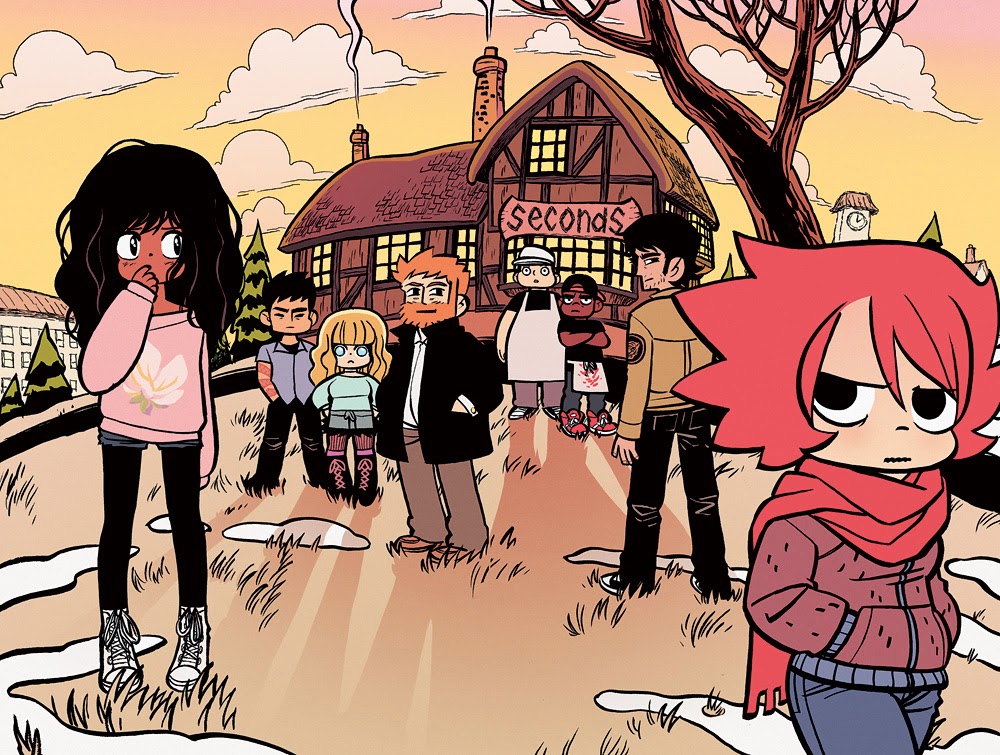 I also have a minor quibble with the artwork. The illustrations themselves are gorgeous, with a predominantly red palette that still invites a plethora of colour amongst the crimson walls of the restaurant, but I’m left to wonder why there are such massive white borders surrounding the pages, particularly at the bottom and not just during beats where lack of imagery is needed for emphasis. It’s the kind of design an annotated or director’s commentary-type of book would use for footnoting from the writer, but they’re completely blank. I find the white chunks take away from O’Malley’s excellent pencils and colourist Nathan Fairbairn’s great work fleshing them out. Maybe we’re meant to fill in those blanks ourselves, like with a do-it-yourself commentary or something. If not, I’m totally stealing that idea for my graphic novel debut anyway.

Succinctly, I really enjoyed Seconds. Saying comparison shouldn’t be invited to Scott Pilgrim might be a little unfair considering their respective geneses and similarities, but I do think they’re more fairly judged as the proverbial apple and orange. Where SP was frantic, fantastical and fast-paced, Seconds is a more sedate, unfolding affair that makes great use of its tight graphic novel format to tell a particularly engaging story. If nothing else it’ll make you want to give someone a really, really big hug at the end, and is that ever really a bad thing?