The Birth and Death of D4VE with Ryan Ferrier 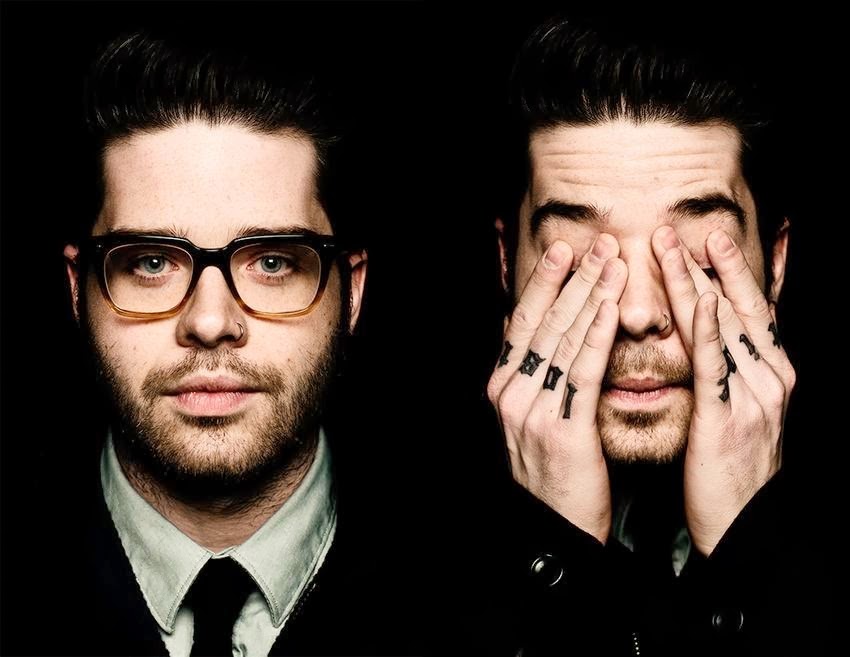 Last weekend I the chance to have an exit interview with Ryan Ferrier after his mini series D4VE finished. We talk about the series and what he has instore next.

Billy Tournas: Ryan, thanks for sitting down with me today. Since we last spoke your miniseries D4VE from Monkeybrain comics has ended.

Yes with its finite ending. How has it been since the ending?

It’s been real bitter sweet for Valentin and myself. It was Awesome in that people seemed to really enjoy it, but it was also really hard to see it end just because as a team we were firing on all cylinders, and it was a lot of fun. A lot of people didn’t realise it was done in 5 issues and were saying that there were surprised that issue #5 was the last one. So it kind rang true for us too. We were like “Aww man this sucks that it’s over”. But it’s been really cool.

Which was your favourite issue?

That is a tough one. I think I had a lot of fun with issue #3. I felt like that was a really interesting turning point in the book. Just because it had the twist in the end with D4VE going to the central computer. I had a real blast with the scene. Also writing the ending to issue #5 was challenging, but it was also very fulfilling. When Valentin sent me the pages for that, it was just a really cool feeling. He totally nailed it.

I know that D4VE is the main character, but do you have a favourite side character?

Definitely, Scotty is someone that I’ve probably had the most fun writing as a character.

Scotty has been a fan favourite. 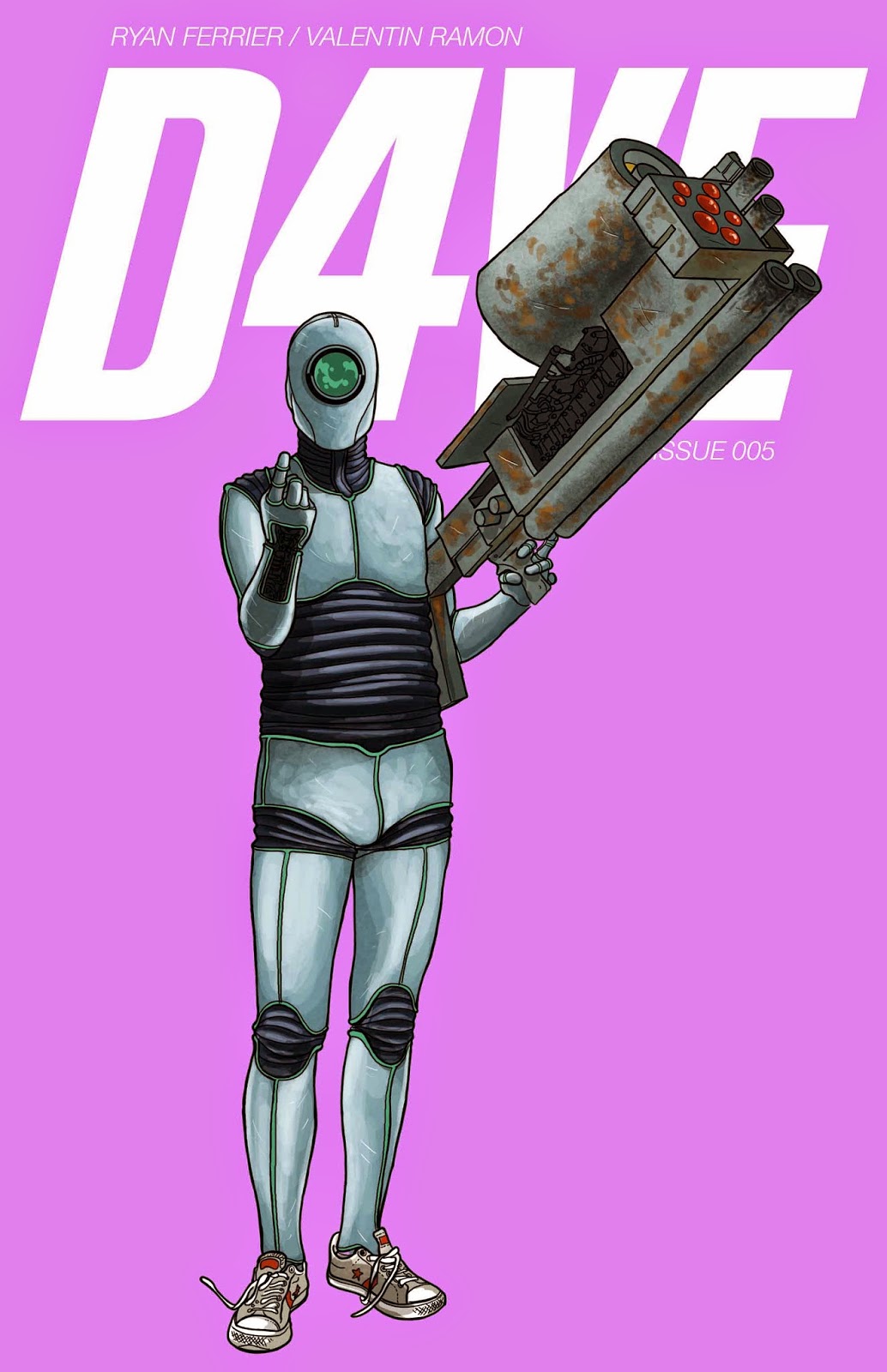 Yeah, he’s a side of me that doesn’t get to come out a lot. He’s almost like a fantasy of mine. So he was really, definitely, the fun part. Looking back I would have done more with S4LLY, D4VE’s estranged wife, but I think if I wanted to move ahead with that world those two characters would have to take the spotlight more.

Do you have a favourite panel or page?

In issue #4 where D4VE tears the flesh off an alien and breaks it’s spine off to use as a weapon is probably one of the most amazing fight moves I have ever seen. That was all Valetin by the way. I didn’t write that. I also like a couple of panels of issue #5 at the end. I won’t say which due to Spoilers. Valentin goes into a lot of detail and is a pleasure to work with.

Post D4VE are you going to be working with him on anything else?

He (Valentin) and I have a pitch floating around that involves a co-writer on something. That is something that’s still a pitch so I’m still not sure it will see that light of day. If something did happen it would at least a year before anything was started.


This isn’t the GTAesque Superpower one you mentioned in our last interview?


No, but since we did last speak of that I have teamed up with an artist and we’re probably going to start pitching that next month. It’s always funny, I try to hesitate things that are early in development as they always never seem to happen. This is one of those things that I’ve kept working on though. I’m really excited.

It would almost be a spiritual successor to D4VE in terms of tone. I’m working on a couple of other things that are a lot more darker and kind of crime driven. The kind of grey dark stuff, but also keeping with some funny stuff like Tiger Lawyer. Hopefully the Buddy Cop pitch gets somewhere. 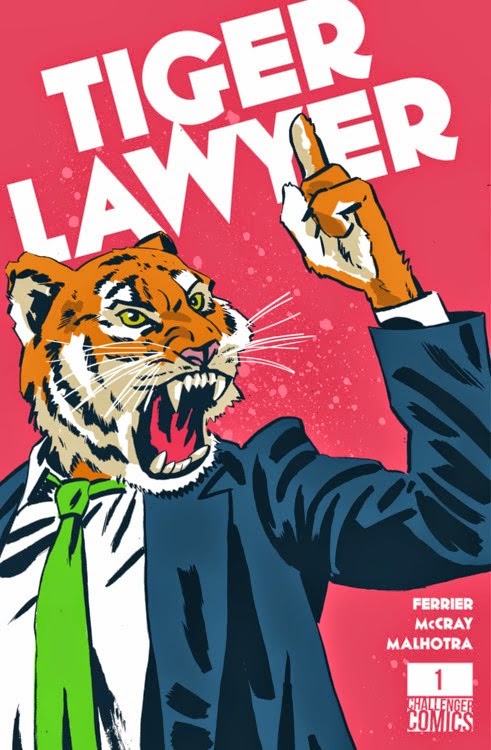 What is the latest news with Tiger Lawyer?

We are all working on issue 4 and taking our time. Vic Malhotra’s story is like three times longer at around 28 pages, and he’s super busy with Roche Limit at Image and X-Files as well. Matt McCray  is also busy and his Tiger Lawyer short is bigger too at around 18 pages. It will be released this year, but I might do something different for issue 4 and release Vic and Matt’s stories separately. They will be full issues as well.

Does that mean a possible collection after issues 4 part 1 and part 2 come out?

That is something that I definitely want to happen, and I have been poking around to make it happen. I think with issue 4, at that point is where we will collect it. We’re still doing the one page comics in Shutter at Image. The collection would probably have a lot more unknown things like some cool panels or one pages that haven’t been released. Just make it feel really special.

How is The Brothers James going?

Yeah it’s super good. Bryan is probably about halfway through issue 4 and that one is really important to us at this point, because Bryan is working out the story with me. So issue 4 is going to have us both credited. We kind of changed our process in how we approached it. It was like a breath of fresh for us and the series. So I’m really excited about that. I think with self-publishing you have to do that. I mean we’re both busy with various works and we’re just taking the time to make it right.

What other future projects do you have up your sleeve?

It’s kind weird in that I’m at a point where D4VE came out and it’s done now, so I have things coming out in 2015 that are big and cool, but I can’t talk about. With comics it takes so long for something to happen behind the scenes. Other than Tiger Lawyer #4 and The Brother James #4 it’s going to be a bit light on stuff coming out this year, even though I’m super busy with work if that makes sense. Also the D4VE trade is something that is going to happen and I wish I could tell more about that but I can’t. It’s going to have tons of stuff though and I’m just finalising some details on it right now. 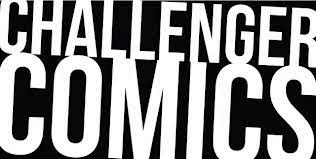 I also have short coming out in an anthology that I believe will be out in early fall of this year. I also have a couple of shorts coming out through Challenger Comics. I would like to work towards putting together another personal anthology once we collect enough. I think I’ll have about two short that will be online for free between now and the end of the year.


Are there any other works that you lettering or curating?

I’m doing the letters on Roche Limit for Image, and also POP for Dark Horse. I’m also lettering an Image Book, but I’m not allowed to say what it is just yet. It’s really cool that I get to letter for Image and Dark Horse this year as they are two of my favourite publishers.

Is there any artist you would love to work for?

Oh man that’s a tough one. So many. Off the top my head I’ve been chatting to Robert Wilson about each other and how much we like each other’s work and hair and comics. He’s someone I would like to work with. There are so many artists though.

What’s the process with co-writing?

The pitch we have now is might first exposure to co-writing and the concept we have was that co-writers concept. So it’s started with them and all we have is the pitch so I haven’t been able to dive fully into co-writing so to speak. It was really fun though working on the pitch as we both clicked right away. We also both know each other’s strengths and weaknesses and put ourselves into position to maximise those. I don’t think I could co-write with anyone though, it would be have to be with someone I really gel with.

Thank you very much for chatting with me, Ryan

No worries always a pleasure.