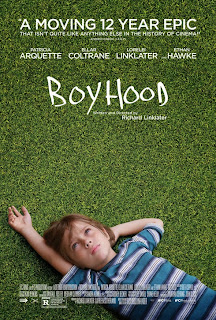 Richard Linklater’s Boyhood is one hell of a cinematic achievement considering that it was filmed over the course of twelve years whilst maintaining the same cast. As the title suggests, the film focuses on the life of Mason (Ellar Coltrane) from age five to eighteen. It’s rather compelling to watch someone grow up on screen over the course of a few hours, something I guess we’re more used to seeing in television series or film franchises like Harry Potter; although in those cases we tend to get instalments usually spaced out over a few years. Boyhood is an outstanding film for both the technical excellence and dedication required to produce it and the touching story which is being told, few films of late have left me as moved when I emerged from them as this one did.

We first meet Mason when he’s lying on the ground staring up at the clouds waiting for his mum (Patricia Arquette) to pick him up after school. Mason’s an adorable little guy who even at a young age is part day-dreamer part rebel; mischievous yet good-natured. Mason lives with his mother and his older sister Samantha, who is played by Richard Linklater’s own daughter Lorelei Linklater. Samantha lives to make Mason’s life hell but then that’s what sisters do … except my sister who is lovely of course … Mason’s mostly absent father is played by long time Linklater collaborator Ethan Hawke, in a performance which should convert even the most steadfast of Hawke doubters out there.

In a strange way there isn’t much a plot to this film, the story kind of meanders along through a random set of experiences which have been lined up for us to view one-by-one, the result of which is that we see the very moments which make Mason the person he is when he’s eighteen. This is exactly what growing up is like. It’s a series of events some significant others less so which all go into what makes us in fact us. Few of us actually lead extraordinary lives but our experiences make us individually unique and special in a kind of extraordinary way. This film beautifully captures this idea and presents it so well. It’s an idea that Terrence Malick explored to great effect in The Tree of Life (2011), except he presented the random moments as gentle whispers and brief flashbacks to childhood, whereas Boyhood takes its time to explore these events in much more detail, meaning it’s arguably a more satisfying experience. It’s only when we start to bring the snippets of Mason’s life that we've seen together, that we get a sense of who he is.

Linklater really took a gamble when casting this film but luckily it’s one that paid off. Assessing Ellar Coltrane as an actor is somewhat difficult given the nature of the film, that being said the performance is just what the film requires. He’s brash and playful as a child and grows into a slightly jaded and cynical teenager who wants to blaze his own trail in life, I think we can all relate in our way to that kind of progression. It’s a typical trajectory for young males and it’s thanks to how Ellar handles the role especially later in the film which conveys the idea. In a similar vein, Lorelei Linklater also develops as the film progresses, but her involvement in the story does start to wane towards the final third of the film. She’s fantastic in her first few scenes, especially her teasing of Mason and her interactions with Patricia Arquette that had me in stitches. Arquette is fantastic as the single mother doing everything she can to provide for her family whilst carving out a piece of the world for her own. She’s truly frightening when she dishes out the tough love yet is the mother we all wish we had the rest of the time. Ethan Hawke is in his element as the rocker-cool-guy father who over times embraces his responsibility as a parent instead of just getting his children to like him. Hawke’s arc is probably the most interesting and the changes which occur in his life over the twelve years are the most significant.

Not only does this film document how the actors change physically and emotionally over the twelve years, it also serves as a time capsule as it were for the social, pop culture and technological influences of the early 2000s through to the past few years. There are plenty of nostalgic goodies to be spotted throughout.

I hate to use the expression ‘must-see-film’ but unfortunately my hands are tied on this one, Boyhood was a near perfect cinematic experience for me. This is the kind of film which you’ll more than likely see topping most ‘best-of-the-year’ lists and will hopefully feature quite prominently at next years’ Academy awards. I implore you to go see this when it comes out, in fact it’ll be your loss if you miss it.

If you see the film and agree or disagree with my thoughts feel free to drop a line below or come over and kick around some ideas on our facebook page.