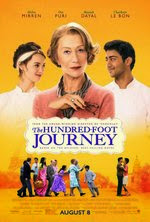 The film follows the journey of the Kadam family who are led from their native India by tragic circumstance to start afresh overseas with their family-run restaurant business. They end up in the south of France, in an incredibly picturesque French village called Saint-Antonin-Noble-Val, where fate indicates that they should open up their restaurant “Maison Mumbai”, despite the close-minded locals, who aren’t keen on the notion of an Indian restaurant in their very French town. Fate also says that they should set up their family business on the site of a deserted restaurant, which happens to be directly opposite a high-class, Michelin star French restaurant, “Le Saule Pleureur” run by the immaculate Helen Mirren as Madame Mallory (The Queen, The Debt).

The ensemble cast is terrific, all hitting exactly the right notes, creating a highly entertaining balance of different character types without ever falling too hard into the realms of caricature. Om Puri (East is East, Gandhi) as the Kadam family patriarch is simply terrific. He is at once soulful, passionate and has a very, very dry humour. He is a delight to watch onscreen, never failing to amuse with his decisive remarks. The Kadam family offspring includes three sons and two daughters including naturally gifted chef Hassan, (Manish Dayal) older brother Mansur (Amit Shah) who is slightly “at-sea” over the new family situation, the bemused and beautiful older sister Mahira (Farzana Dua Elahe) and the sprightly little ones, Mukhtar (Dillon Mitra) and Aisha (Aria Pandya). The story revolves around Hassan and his particular cooking and personal genesis. Hassan has a youthful yet very driven enthusiasm for cooking; a love which has many layers of meaning for him and Manish Dayal’s (The Sorcerer’s Apprentice, Walkaway) performance is so sincere that it invokes viewer empathy with ease.

From the beginning, the Kadam family come to loggerheads with Madame Mallory, being only one-hundred feet from her door and "Maison Mumbai" is quickly viewed as an eccentric operation as well as competition. One does wonder why Mallory could not be played by a French actress but obviously Mirren is the “name- actor” attached to the film and is, as you would suspect, superb and all class. Her sometime fierce, incredibly stylish, ice-queen restaurateur is a perfect foil to Om Kadam’s similarly stubborn patriarch. Also in Madame’s kitchen is the doe-eyed yet intelligent, young French local, Marguerite, played beguilingly by Charlotte Le Bon (Yves Saint Laurent, Mood Indigo). Marguerite’s passion for food aligns with Hassan’s and they form a friendship teetering on complicated romance as their restaurants and cooking passions collide.

Director Hallstrom, is probably best known for his films Chocolat, The Cider House Rules and What’s Eating Gilbert Grape and like these films The Hundred-Foot Journey is based on a best-selling novel. It is more similar to Chocolat in tone and in its dreamy, almost Disney–like romantic vision of Europe. The French village, Le Saule Pleureur, is beyond pretty and is nestled almost symmetrically between lush hills and with a river running alongside it, and even glows in warm sunsets and into the evening. The film incorporates a palette of blues against oranges and yellows in almost every scene, conveying always a sense of optimism, beauty and warmth. And even more than in Chocolat, you want to eat everything off the plates in the film. The insight into kitchens, restaurant awards and food-preparation is exacting and absorbing and convinces that we are watching individuals with real gifts and talents for preparing food.

The final arc of the story arrives unexpectedly just as the film starts to feel like it is winding up. Despite feeling like slightly extended viewing, the extra journey is not unwelcome and provides an interesting look into another side of the culinary world, as well as France. Because of this extra journey, the conclusion to the film feels fully realised and satisfying and hones the core values of the story.

Yes there are some quirks of fantasy in the plotline and you can expect some healthy family and life values along with delicious-looking food (it is produced by Oprah Winfrey and Steven Spielberg after all) but leave your cynical self at home, ensure your cinema has a very good Indian or French restaurant nearby so you can enjoy a glass of bubbly and you will have a very pleasant and entertaining escapist excursion.

The Hundred-Foot Journey is in cinemas on Thursday 14th August. If you see the film, please share your thoughts below.