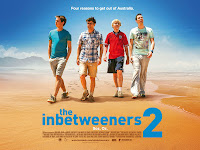 It would seem that there comes a time in a television show’s life when they no longer want to be trapped in their half hour prison. Spying on their older cousins of the entertainment world (films) running around having a ball making it look oh see easy, they become jealous which inevitably leads to delusions of grandeur creeping in. Which results in a bloated television episode masquerading as a terrible film. The Inbetweeners 2 feels like a 200m sprinter who is forced to run a marathon; it’s quite painful to watch a once graceful runner cough and splutter their way to a truly unsatisfying finish. Whilst there are glimpses of the humour that the television series was built upon, they are vanquished by the sloppy attempts to shock the audience through a variety of bodily fluid gags. It’s all be done before and by better films.

The film opens with Will (Simon Bird), Neil (Blake Harrison) and Simon (Joe Thomas) having a tough time fitting in post high school. They are lured to Australia by Jay (James Buckley) who sends the lads a video which successfully ticks off every cliche lampooning of our fine nation in the broadest way possible. It’s basically just Jay walking through various visual gags poking fun at Australia and claiming to have shagged every woman in the country. To no ones surprise the boys fly out and after meeting up with Jay they find out he’s not living the life he’d bragged about. After a chance meeting Will falls for Emily (Katie Berrignton) a friend from his youth and the quartet shoot up to Byron Bay to prove they are hardened journeymen seeking real adventure.

What annoys me about television shows coming across to film is that there’s a distinct difference between the two mediums. In television shows the plots are allowed to fairly straight forward considering the time constraints. They are squeezing a basic three act structure of problem, conflict and resolution into twenty odd minutes, they rely on the charm of the characters to carry us through. In film though, the story needs to be far more interesting if it’s meant to sustain a ninety minute run time, and this just isn’t particularly interesting. There is too much filler and repetition of jokes. Which screamed the writers were merely treading water hoping that the popularity of the lads would get them by, which frankly it just didn’t. Outside of the obvious financial rewards for releasing this film it really doesn’t have too many other redeeming features for me.

If you’re a fan of the show you’ll more than likely get a kick out hanging out with these guys for an hour and a half but it’s well off the pace of what the show produced. The comedy fell flat and was way too juvenile for my liking. I longed for the charm and spark of the show but sadly seems as though that’s been completely wrung from the franchise. I’d rather go watch American Pie again if i wanted a teen comedy about trying to get laid.

If you see the film and agree or disagree with my thoughts feel free to drop me a line below or come give me a bollocking over on our Facebook page.