The Witcher 3: Wild Hunt is shaping up to be the must have next (current) gen game and a fantasy romp unlike anything ever seen. Whether or not you grab a plain old vanilla copy or the sexy as Collector's Edition, you're all but guaranteed an epic adventure.

CD PROJEKT RED and NAMCO BANDAI GAMES have released full details of the exclusive Xbox One Collector's Edition as well as a 35 minute gameplay video and a look at "Downwarren", a clip that showcases the gorgeous 3D engine, landscapes and Geralt's abilities in combat. One thing is certain, February 2015 can't arrive quick enough!

The Xbox One Collector's Edition of The Witcher 3: Wild Hunt now contains:

· The standard edition of the game, containing: the official soundtrack, a beautiful and detailed map of the in-game world, unique stickers, and the developer-created "Witcher Universe - The Compendium"
· A giant, 33x24x26 cm, 100% hand painted, Polystone figure of Geralt of Rivia battling a Griffin
· An exclusive, collector grade Witcher medallion
· A one of a kind SteelBook™
· A two-hundred page artbook, containing breathtaking art from the game
· A cloth map of the game world
· Two Gwent card decks
· Huge outer and inner Collector’s Boxes you can store your Witcher merchandise in! 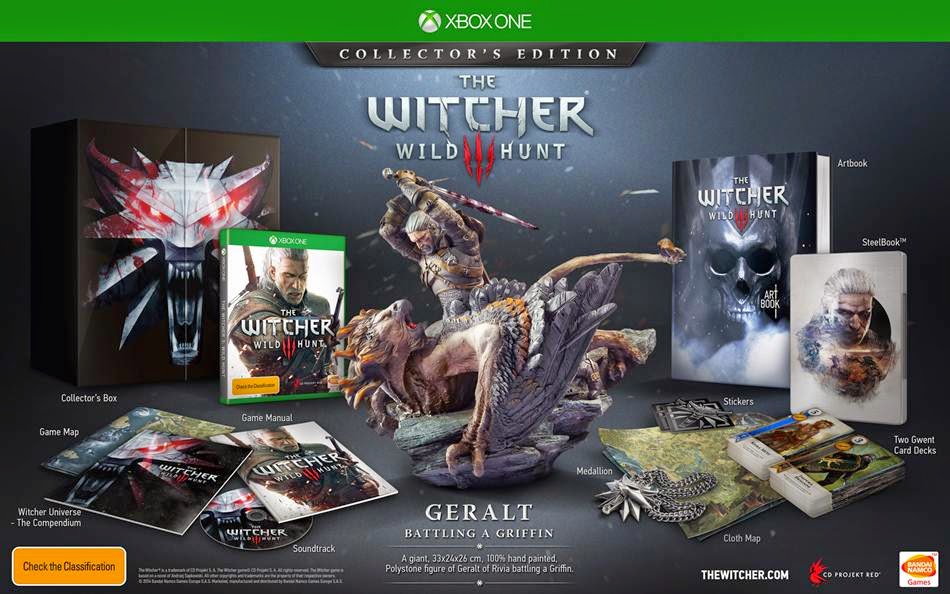