Having previously glowingly reviewed Naoki Urasawa's 20th Century Boys, Pluto, and the anime adaptation of Monster, it should come as no surprise that the manga series that preceded those previously mentioned series is another absolute masterpiece. Honestly, I had to head to the superlative store just in case I ran out during this review. In short, don't bother reading this review unless you're in the mood for some unbridled gushing, just go buy this title instead.

On of the worlds greatest surgeons, Dr Kenzo Tenma, is faced with tough decisions every day, decisions that can literally mean the difference between life and death. The pinnacle of  morality, Dr Tenma finds himself seemingly responsible for countless deaths after unknowingly creating a monster the likes of which he has never experienced.

Suspense is the name of the game and Naoki Urasawa is a star player. This MVP manages to make the titular "monster" seem to be something greater than simply a bad guy. Like with real life murderers such as The Red Ripper, Citizen O and La Bestia, the villain in this series is more monster than man and although there is no hint of anything supernatural, Urasawa manages to weave a web which is so chilling that it comes across to be ghostly. This intricately woven web introduces a wide range of characters who all seem well established even if they only last a short while before being dispatched. 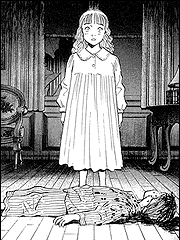 Displaying Urasawa's trademark "cartoony yet semi-realistic" (a term of my own creation, shocking I know) artistic style, he manages to make the aforementioned large cast of characters all appear to be distinct from one another, not only physically but in personality as well. A facial expression here and distinctive body language there all go towards creating a world which appears to be as organic and individual as our own. Urasawa takes a slightly different tact than many other manga creators when dealing with Western characters. Instead of just focusing on fair hair and big noses, he creates characters which are somewhat more subtle in appearance, focusing instead on the shape and proportions of noses, faces and eyes.

Suspense prospers when surrounded by quality characters and the build up of suspense begins to pay off immediately instead of waiting for any form of resolution. Dr Tenma, the main protagonist in this story, is a great man in so many ways. His abilities with a scalpel are coupled with an altruistic personality which makes him immediately likable. While he may be a little bit impressionable when it comes to matters of a professional nature, his true sense of self is eventually revealed, and deconstructed, in what is an at times harrowing ordeal. What happens to this truly great man matters. While this may seem as though the often touted "Master of Suspense" may have jumped the gun, but that statement could not be farther from the truth. Instead, Urasawa consistently feeds the reader with information which both teases and satiates interest. Instead of waiting for one all encompassing finale, which is no doubt coming, Monster Volume 1 continually delights while still maintaining an incredible level of mystery and intrigue.

I've said it before and I'll say it again, Naoki Urasawa is the greatest living manga creator and an absolute treasure of the art form. Extending beyond the manga realm, he is a master of story telling in general and of the three stories of his that I have read (Monster, Pluto and 20th Century Boys), I have in no way been disappointed. Needless to say, I'm extremely excited for Viz's December release of Master Keaton by Hokusei Katsushika, Takashi Nagasaki and the master himself.