The Devil is a Part-Timer! Blu Ray Review

There have been countless stories about the Devil, Beezlebub, His Infernal Majesty finding himself in the realm of humans but this is a story with a difference because as the title (of the light novel, manga AND anime series') suggests, the Devil is a Part-Timer (はたらく魔王さま!). 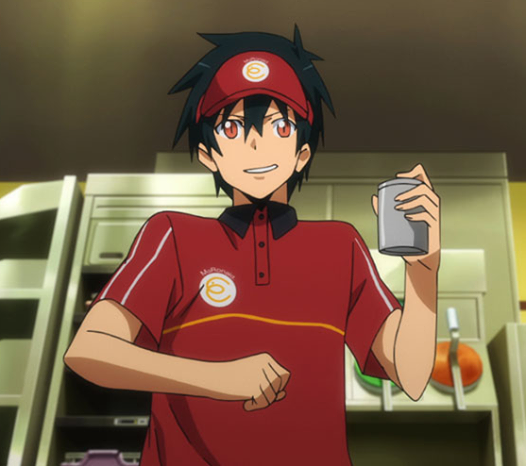 Finding himself stuck on earth, in a diminutive flesh-bag of a human body, the Devil and his offsider find themselves in need of work to pay their way in this new and unusual world. Enter fast food chain, MgRonald's. The dark lord not only takes up a position in customer service but he excels at it! Finding himself filled with both disdain and affection for his new home, the devil and his lackey are subject to action, adventure, hilarity and a number of difficult personal choices.

While this series is above all else a comedy, The Devil is a Part-Timer! has quite a few action sequences which are so well realised that it made me wish for even more. That's not to say that the series suffers, but those action sequences, particularly in the early episodes which show how the Devil winds up on Earth, are ridiculously good. This is undoubtedly thanks to the studio which is earning more and more of my respect with every release, White Fox. With Steins;Gate, Jormungand and Akame ga Kill under their belts, White Fox have shows that they can handle action, intrigue and now comedy with the greatest of ease.

Throughout the series' snappy 13 episode run there are a large handful of characters introduced while maintaining focus on Sadao Mao (Satan), Emi Yusa (the hero), Chiho (the love interest) and Shiro Ashiya (Satan's right hand man). These four characters rightfully receive the lions share of screen time and character development although I feel as though slightly more time could have been spent on Ashiya and Chiho so as to make there motivations a little more clear and meaningful. Beyond this core group, further characters are continually introduced but none are particularly striking or memorable apart from Hanzo Urushihara (Lucifer) and Suzuno Kamazuki (Crestia Bell) who I'd also have liked to see more of. That said, with only a 13 episode run time is of the essence.

The english dub is actually quite good with the voices of Sadao Mao, Josh Grelle, and Ashiya, Anthony Bowling, bounce off each other very well and alternate between modern day english and the grandiose pomp of the demon world to great comedic effect. With the Japanese soundtrack, Yoko Hikasa portrays a wonderfully tsundere Emi Yusa and Hiro Shimono voicing a wise-as gen-Y Lucifer. Whether you decide to choose the Japanese or English dub, you'll be please with what you hear.

The Devil is a Part-Timer! is a lot more enjoyable than it deserves to be. The premise of Lord Satan himself tossing fries is just plain stupid but this series pulls it off and is definitely worth a watch. It's funny, very well animated and filled with lovable, memorable characters.

The Devil is a Part-Timer is available now on Blu Ray and DVD. Not only that, but this fantastic series is coming soon to anime streaming service AnimeLab.com!
Anime Blu Ray Reviews Siren Visual The Devil is a Part Timer White Fox