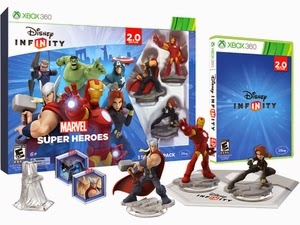 At times, I question how far I've actually aged. Biologically I'm 24 years old, but it's anyone's guess what number the parts inside the brain case add up to. Sometimes I feel the relative youngness of those 24 years, but sometimes I regress into something closer to single digits.

Disney Infinity 2.0 makes me regress, in a great way. There are few other ways one can enjoy Thor fighting Elsa from Frozen in a treehouse, or Star-Lord and Dash from The Incredibles having a foot-race through New York, or even Iron Man picking up and punting Jack Skellington over a gaping abyss like a flying red-and-gold man cannon, unless you regress somewhat.

Last year's vanilla Infinity (which I guess is 1.0?) was a gaming-cum-merchandising attempt by Disney to make the Skylanders lightning strike for them. It was a fairly simplistic but artistically engrossing game that featured a plethora of Disney characters - existing in the real world as wallet-puncturing plastic figures you could put on a base to use in-game - fighting as allies or enemies in five campaigns and a fantastic Forge World-esque mode called the Toy Box. While vast chunks of the gameplay were derivative of just about any basic kids' platformer/action game, and the stories were - to put it charitably - a bit of a joke, the Toy Box provided hours of fun by creating maps, challenges, mini-games and giant grass-block status of Mickey Mouse's head (the latter of which, surprisingly, is fairly easy to navigate once you unlock the jetpack).

A year later, the sequel takes the same formula and throws a collective of similarly bank-breaking Marvel Comics figures into the mix to play with. Like its predecessor the gameplay and story for all of Infinity 2.0's three current campaigns is simple, spanning stories involving the Avengers, the Ultimate Spider-Man crew and the Guardians of the Galaxy respectively. The narrative boils down to "Bad guy from the Marvel Universe does a bad thing, heroes stop them, everyone gets cake afterwards". The button-pressing mostly involves hitting things, throwing things, riding around on things, flying around on things and blowing up things, sometimes with several of the above happening at once. Groundbreaking innovation is not what you've come here for. No, trust me when I tell you that you're here for the Toy Box.

The fun inherent to the Toy Box - in all honesty, most of the reason to buy the game - is purely cartoonish. It comes from putting Disney and Marvel characters together into situations like racing down a water slide or driving dune buggies into haunted castles. TheMinecraft-inspired creation of maps and the suite of toys to add to them adds dimensions of uniqueness and creativity (when you're not making simulacras of locations from Disney movies). It's the same formula that makes smacking two action figures together in sandcastles fun when you were younger, without the chance of breaking anything if they collide at the wrong point. Simple, colourful and full of vibrancy.

Tweaks have also been made to existing mechanics since the first game, most notably through the

inclusion of RPG-style Skill Trees to customise characters a bit everytime they level up. Granted, most of that customisation is just more colourful ways to destroy things and jump/fly higher, but it's still a welcome change from the last game's choice to have level up numbers not really mean anything. Well, not meaning anything other than being a representation of how many hours you've sunk into getting Jack Sparrow to the optimum level for bragging rights.

All praise said, though, you've really got to want to be into the Toy Box to get any decent mileage from Infinity 2.0. If you don't have the patience for creating Cinderella's castle from scratch or

making a miles-long racetrack over tons of lava then you may find the price point a bit of a disincentive towards purchase. As I said before the campaigns are simplistic and don't offer much in the way of variety, with much of the runtime devoted to different ways of smacking things, so it means you need to rely on making your own fun to register the game as anything other than a momentary simple digression from more complicated fare. That's as double-edged a sword as ever there's been since claymores were invented.

But if you do really dig the Toy Box, and creating fuel for fanfics by putting Black Widow and Rapunzel together on an adventure into the heart of an alien volcano, then Infinity 2.0 may be right up your proverbial alley. There's not a lot more I can say about it; fun, colour and childish glee are all in abundance while variance and complexity take a lunch break. This is a game where the most difficult decision is choosing which pairing of childhood characters you're going to send to the Disneyland Haunted Mansion that sits beside the balloon house from Up. Sometimes, that's not such a bad thing.