No offense intended but if someone were to recommend a sci-fi series which is filled with Muppets, set inside a living ship, produced in, and starring actors from Australia I'd call them crazy. Luckily, Farscape is the kind of series which shines in spite of expectations.

Flung through a cosmic wormhole, American astronaut John Crichton finds himself fighting for his life in the middle of an alien prison break, inside a Leviathan a living space ship on the far side of the galaxy. Hunted by the relentless Crais, a commander of the galactic enforcers known as Peacekeepers, Crichton joins forces with the alien convicts hulking warrior Ka D’Argo; blue-skinned Priestess Z’haan; diminutive Dominar Rigel XVI; the giant symbiote Pilot and the irreversibly contaminated Peacekeeper Aeryn Sun. Each desperately seeks a way home, but first, they have to find a way to trust one another. Daring escapes and selfless acts of courage forge a measure of loyalty, friendship and even love.

The first season’s breakneck action heats up with the introduction of the coquettish thief Chiana and the sinister Scorpius with his dreaded Aurora Chair. Arrival and departure, birth and death, rescue and betrayal, all lead up to a season finale cliffhanger that is, literally and figuratively, breathtaking.

Considering the pedigree behind Farscape, it should come as no surprise that it's fantastic being co-created by Rockne S. O'Bannon, creator of the legendary Alien Nation, and writer on The Twilight Zone and seaQuest DSV, and Brian Henson of, well, Henson fame. It's easy to see where each of these creatives are most involved with a great, densely populated sci-fi universe which is brought to life by some seriously great quality practical effects from Jim Henson's Creature Shop.

Probably the only negative from this series is the seriously dated CGI used for ship exteriors and space battles. That said, Farscape isn't the only series to suffer from dated CGI, pretty much every series from the 1990's and early 2000's fell into that trap. However, as seen in the recent Blu Ray releases of Star Trek The Next Generation, practical effects can be polished up and transfer well into hi-def. Luckily, the majority of Farscape features practical effects in the form of characters and also production design for ship interiors and in that respect, it nails it! 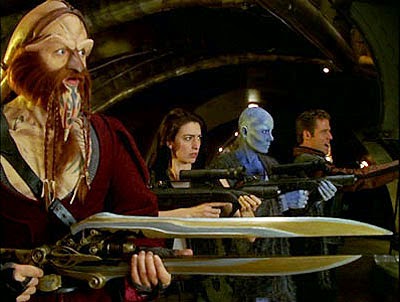 Of course, character effects are nothing without some serious acting chops under the mask so thankfully the main players all deliver more than just physical presence. One of the first alien characters we're introduced to is the initially threatening Ka D'Argo. Across only the first few episodes, D'Argo goes from being a Twi'ilek version of Worf to his own loveable powerhouse by portraying the character as not only a hulking warrior but also a sharp tongued (pun intended - you'll get it if you watch the first episode) comedic backstop to the stern and stoic Aeryn Sun and Pa'u Zotoh Zhaan which shouldn't be too surprising considering his previous credit as Steve Kerrigan in The Castle. Add to that the utterly loathsome and terrifying antagonist Scorpius played by Wayne Pigram and you've got the makings of a brilliant foundation for an epic sci-fi series. And that's what we get.

Although episodic in nature, each episode contributes to a much larger storyline which ultimately centres around the lost-in-space John Crichton (Ben Browder) trying to get back home by unlocking the secrets behind wormhole technology, all the while butting head with his new crew who believe that he is little more than a shaved ape. Along the way, each character gets their time to shine with episodes and stories which a more than just an excuse for screen time. Each character matters and each one contributes to the overall story, especially the living ship, Moya.

Farscape is up there as one of the great sci-fi series which was cancelled before its time. At only 4 seasons long (plus a feature film), it manages to create a universe which is as rich as franchises which see the release of multiple series'. This first season starts with a bang, introducing a loveable cast of characters and delivering some fantastic sci-fi fun.