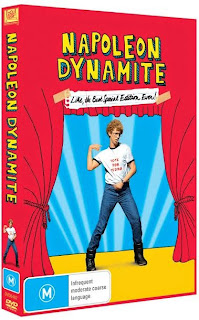 I recently watched Napoleon Dynamite for the first time, and was worried that it wasn’t going to live up to the hype. It’s one of those films that whenever I mentioned I hadn't seen it, a chorus would sing out declaring it one of the greats. So it was with great trepidation that I decided to put its reputation to the test … and it was glorious! A delicious blend of quirky characters, exquisitely-timed comedy and tonnes of heart, which is everything I want in a film like this.

I’m not surprised that Napoleon Dynamite is held in such high regard since, at its core, it’s a tale about finding your special place in the world where you’re free to just be you. It’s so damn relatable because, in this increasingly social-media-fuelled world, it feels as though those spaces are becoming harder to find.

I particularly love how Director Jared Hess (Nacho Libre) took a nondescript location and populated it with such fascinatingly peculiar inhabitants. In a way it reminded me of Baz Luhrmann’s Strictly Ballroom or Wes Anderson’s Rushmore. No matter how bizarre the characters were, I found myself being drawn into their trials and tribulations, which is definitely something I wasn’t expecting from this: heaps of humanity.

Forgive me whilst I squeeze onto the Napoleon Dynamite bandwagon, but I truly hope this film continues to find new fans who will relish its special brand of awkwardness. I know I’ll definitely be returning to it on a regular basis.

There’s no better time to either watch or rewatch the film, as this year it celebrates its 10th anniversary. Napoleon Dynamite is available to buy or rent on iTunes.

Please feel free to share your favourite moments from the film in the comments below or come over and play with us at our Facebook page.

Check out Napoleon Dynamite in the iTunes store here