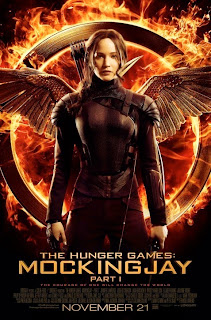 Following two exhilarating instalments, The Hunger Games Mockingjay Part 1 serves more as a point of reflection for the franchise, allowing its characters to recover both emotionally and physically, before building to what promises to be an enthralling climax. I can’t say I had as much fun with this film as I did with the preceding ones, but in fairness The Hunger Games Mockingjay Part 1 has to be viewed in the context of the entire story. If this were a ten-part television series then this film would be equivalent to episodes 6, 7 and 8, so one must appreciate the role it has to play in setting up the finale.

After all she’s endured, Katniss Everdeen (Jennifer Lawrence) is suffering from PTSD - understandable given what she’s experienced up to this point. Struggling through nightmares and panic attacks, she is being hoisted up as the symbol for the rebellion against the Capitol, a burden which rest uneasily on her shoulders. The rebellion is being led by District 13 which is governed by the stoic President Alma Coin (Julianne Moore) and chief advisor Plutarch Heavensbee (Philip Seymour Hoffman). As Katniss is being groomed as a poster girl for the rebels, the ruthless President Snow (Donald Sutherland) is using Peeta Mellark (Josh Hutcherson) as his pawn in his own game of propaganda. Just as Katniss and her crew had to adapt to the Hunger Games, this new conflict will throw them closer to danger than they’ve ever been, as the Districts of Panem are exposed to the horrors of war.

Jennifer Lawrence’s performance beautifully captures the plethora of emotions that Katniss is experiencing, from manic fear to courage-under-fire, even to goofiness. Despite her first few scenes being a little underwhelming, the addition of Julianne Moore to the cast proved quite fruitful, given the dramatic oomph she injected. The other cast members all basically pick up where they left off from The Hunger Games: Catching Fire and don’t miss a beat; it’s a fine ensemble who seem to prosper from the time they’ve obviously spent together creating this world.

This franchise is taking the Twilight/Harry Potter approach of splitting the last book into two film adaptations, and I’m still not convinced that it’s warranted. It wasn’t as if this film covered so much story that it was clear they needed the extra time and, in fact, there was plenty of fat which could have been trimmed. The first two films cracked along at a decent pace which assisted the shortcomings in the narrative. I understand the commercial impetus for making two films where there could be one, but it’s a risky endeavour when the quality of the storytelling is potentially jeopardized.

Just as the other films have ended on cliff-hangers, The Hunger Games Mockingjay Part 1 will leave you bemoaning the fact it’ll be another long year before this all gets wrapped up, but something tells me it’ll be worth the wait. The Hunger Games Mockingjay Part 1 very much feels like we’re taking a deep breath before plunging into a satisfying climax in Part 2, and I’m definitely hanging around to see what it has in store for us.

The Hunger Games Mockingjay Part 1 is open in cinemas everywhere from today. If you see the film and agree or disagree with my thoughts feel free to drop a line below or come over and join in the caged death match which is our Facebook page.