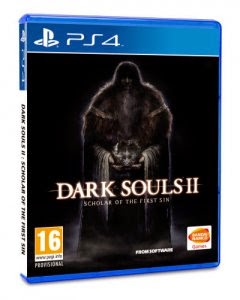 I'm one of the first to herald games that don't hold you by the hand for their runtime. I feel a lot of those Call of Duty or Uncharted-type spectacle-driven escapades not only make the experience only slightly above watching a movie, but they invariably detract from the higher brain functions games can and should tap into. Give me the choice between tapping buttons to imperiously shoot things monotonously or employing the upstairs thinking machine to sort out tactics when battling homicidal skeletons, and it's not choice at all.

So even though it flayed me like a Greyjoy, I really dug Dark Souls. It was a complex, visually rich and mechanically challenging grind I was happy to consign myself to for several hours at a time. To be honest, I never possessed the masterful control over the monsters and environment many Let's Players developed through constant, blood-soaked repetition. I just liked having to think about a game in addition to simply playing it, and I liked that it was entirely possibly to completely fail and have to start again without an expansive safety net. To quote Batman Begins, sometimes we fall so we can learn to pick ourselves back up again.

But if Dark Souls was a simple rinse-and-repeat of falling and rising, Dark Souls II: Scholar of the First Sin is a bunch of falling, breaking a rib, then rising again, then when you fall again you break another two ribs, then a wrist, then you lose a kidney, and the analogy starts to break down.

To put it simply, Dark Souls II: Scholar of the First Sin is hard. But you probably knew that already.

The game is a repackaged and updated release of last year's Dark Souls II with all the DLC bells and whistles attached for current-generation consoles. As such, much of what I'm about to say will undoubtedly be very old news for many of you. Chances are the really hardcore Souls players are already scoffing at my neophyte approach as they carve out the buttocks of twelve caprademons at once, for the sixteenth time today.

For those of you either new to the Souls 'verse or having had just the first game as experience, let me say that Scholar of the First Sin is undeniably worth your time. A large part of that is because of, rather than in spite of, the game's intense difficulty. Let's not mince words: there are people trying to break concrete walls with toothpicks who'd have an easier time at their task than some of the players of Dark Souls II. The game is unrelentingly brutal from the word go, with each subsequent death chipping away at your maximum health and depriving you of the souls (the game's equivalent of experience points and currency) that you arduously gathered from all those slain zombies. There's also not much in the way of tutorialising, meaning you'll most likely have GameFAQs open simultaneously in order to work out how to level up or find the Estus Flasks that are your sole renewable means of health replenishment.

I say that with zero shame, by the by: there are secrets and objectives peppered throughout Dark Souls II that can only be found with a walkthrough or an insane degree of luck and/or overly-developed attention to detail. Maybe that makes me a failure as a player, but there are only so many times I can handle being stomped by a statue-sized dude in armour before I growl, "Right, so what's a way to get around this bastard?"

Remember how I said I loved the first game because I sucked at it? A lot of that love both there and in Scholar of the First Sin comes from the repetitive kill-die-recover rigmarole that, eventually, results in a victory by curb-stomp or skin of your teeth. That might not sound like a ringing endorsement by effectively saying "The game is good and you should play it because it's hard and repetitive", but trust me when I tell you the satisfaction that ensues from an inevitable victory is worth it. I spent a good three or four hours fighting a particular Dragon Rider guy, dying many times to his (compared to other bosses) basic attacks and coming back to life at a bonfire, determined to beat this guy despite the fact it was 3 in the morning and I had to leave for work in four hours. I ground scimitar-wielding ninjas and the aforementioned statue dudes over a solid night's work of slashing, dodging and countering, until I'd gathered enough souls to bolster my level and equipment to the point where the Dragon Rider fell to my blade, after probably the fifteenth or sixteenth attempt.

Let me tell you, the euphoria that follows is awesome. He wasn't even the biggest boss in the game, too.

Your enjoyment of Scholar of the First Sin, and Dark Souls in general, will live or die depending on

what you ask for in a game. If you're after something casual and easy on the thinker, look elsewhere. This is the kind of place one would come to for a challenge, undertaken by the kind of gamer who likes to emulate Klingons and nearly snaps their controller in frustration at the twenty-seventh death of their character that hour. This is a game reliant on gritting your teeth and slogging through the trenches to get to those golden, unbeatable moments where those boss guys fall, and you gain souls from their death, and you feel great.

It's also the kind of game for people who like a marriage of fine visuals and geographical exploration potential. The environment of Drangleic is expansive, full of nooks and crannies for loot and dudes

trying to kill you. Graphical gorgeousness is boosted by the shift to current-gen consoles, and the runtime is smoother than I remember the first game operating on the Xbox 360 at. It's an aesthetically stunning game with the kind of dark, brooding style taken from the very best in gothic narratives, and while you probably wouldn't want to live in its world - particularly with all those bloodthirsty skeletons I mentioned - it's very pretty to look at.

Dark Souls II: Scholar of the First Sin might make you work for your sense of gratification in a way few other games do, but in my opinion the grinding slog is worth it. This is the kind of game that truly challenges, something I feel is lacking in the current gaming clime to an extent. If more games took on Dark Souls' mentality of making you put some Sisyphean effort in for your achievements - like I hear Bloodborne does - then the world would be a better, if slightly more controller-snapped, place.

Dark Souls II: Scholar of the First Sin is available now for Xbox One and Playstation 4.