- June 26, 2015
Suffice it to say there are MAJOR SPOILERS FOR THE FIRST TWO FILMS, as well as MINOR SPOILERS FOR THIS ONE. I'd honestly recommend you watch both before you get stuck into my wordiness. 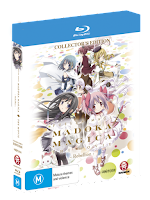 Long-time readers of the site will know that I was, to put it very mildly, pleasantly surprised by the first two Madoka Magica films. As someone who hadn't seen the anime but had had it recommended and praised to high heaven, it was gratifying to see a story as lauded as this that actually lived up to a lot of the hype. It might not be Evangelion or Cowboy Bebop, but dammit it if isn't still one hell of a great film.

That was a great enough experience for me on its own. But then I found out there was a sequel. That had been released earlier in Japan. And was coming out here. In English. In 2015.

If there was a thermometer for measuring how excited a guy can get, it would've burst its mercury at this point.

But that also left me skeptical. The original movie ended quite firmly, with a really touching conclusion that did offer a sequel hook but was also content to imply that if this was all there was, then that was ending enough.What could a third film, tacked on after an excellent story, hope to accomplish?

Well, there's no easy answer to that, because Rebellion is at once conforms to, distorts and utterly breaks away from the mold that the first films and series created. It is to Madoka Magica what the third Rebuild of Evangelion was to that franchise: familiar and alien all at once.

So Rebellion starts off fairly similarly to the opening of the first movie, literally replaying the scenes
with Madoka waking up for school, brushing teeth with her mum and eating tomato breakfast with a brother whose cheeks are rosier than a Japanese flower garden. She leaves for school, seeing her friend Sayaka on the way and being introduced to new transfer student Homura. 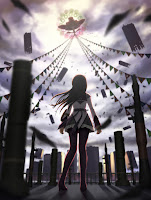 Except, through all this stuff taken verbatim from the first film, there are subtle differences. Kyubey, the expositionally-verbose villainous alien cat-thing from the previous films, is now her pet who can speak only in a Pokemon-like repetition of its name's first syllable. Madoka sees Sayaka alongside Kyoko, the fiery redhead who never went to their school and lived in the ruins of a church, who's decidedly less antagonistic. Homura follows the girls after school and joins their battle against a Nightmare, with all four and their friend Mami (who is very not dead) turning into Magical Girls in a sequence mashed up out of Flashdance and the opening credits of Power Rangers.

So things are somewhat different, and that's because the world isn't quite what it used to be. After a series of strange events, Homura deduces this is not the world as it should be. The Magical Girls don't fight Nightmares, they fight Wraiths...or maybe something called Witches. And isn't Sayaka a Witch? And didn't Mami die? And isn't Madoka meant to be some kind of godlike entity?

It's obvious early on that we're dealing with a dream world/Matrix-style plot, watching Homura be the only sane girl in a world that gets progressively weirder. For a while it feels like something that's at once a do-over of the original story and a continuation of it, with characters' memories returning from the prior films' events and the facade of the world slowly cracking. Then the plot swerves start occurring, in true Madoka Magica style, and that's where I'll stop recapping.

Chances are you already know if you're going to check out Rebellion. If you loved the first films, as I did, you'll dive into this one. If you weren't so keen on them, then you probably won't. If you haven't seen either of the first two then what are you doing here stop reading spoilers you idiot.

Rebellion is very much a film for existing fans, doing very little to explain or rationalise past events and context for the craziness that happens here. Even for veterans like me the movie is hard going, relying on copious exposition from Kyubey at strategic moments and indulging in a very Alice in Wonderland meets The End of Evangelion for most of the film's third act. Make no mistake, Rebellion is all about the abstract weirdness and that funky art style used for the Witches that makes the film look like it was put together with anime hand drawings and off-beat French artwork. If nothing else, it's certainly unique.

But the above paragraphs kind dance around the larger question you may be aiming at me, which is "Did I like it?" Well, yes and no. I definitely think the first two films were better, ending on an excellent note and leaving it open enough to ambiguity that I was satisfied with that cinematic journey's endpoint. That doesn't mean Rebellion is bad, or even superfluous - numerous scenes end up expanding on or refuting things we might have taken for granted in the last movie - but it's a difficult animal to judge compared to its predecessors. I love seeing the characters again, I love the unique art style, and the opening half hour, once we're past the J-pop credits and overly cutesy introductions, features the kind of excellent, Avengers-style team battle that the first two films couldn't really indulge in. I'd seriously be happy just seeing that opening fight and leaving it at that.

Magica universe, putting it against the wall, shooting it, shooting it again, bringing it back to life, then shooting it a third time. The level of deconstructive effort put into Rebellion almost makes you wonder if everything we saw in the first two films was just a delightfully depressing fever dream, leading to the grand reveals of truth in the third. That's at once ambitiously bold and potentially fatal, especially when Rebellion builds on both an existing anime series and a two-movie condensation of same. The former story has literally been told twice over, not counting the manga adaptations or various other media. It's a narrative ingrained in longtime viewers' consciousnesses the same way Evangelion or the Star Wars original trilogy is in mine. To start pulling threads from that complete tapestry and show us that, no, what we knew isn't really true, is dangerous in terms of maintaining trust with the audience and potentially souring the experience of the previous installments. It's a claim of ruining the franchise that was leveled at Evangelion 3.33, and I wouldn't be surprised to learn if it's a similar situation here. 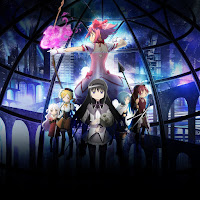 For what it's worth, I liked a lot of the changes that were made and the directions Rebellion took. I'm still chewing on some third act reveals that moved the movie to its, at least for me, completely unexpected endgame, and the fact that I'm not simply condensing this review into a "It's as good as the first films, go see it"-style affair shows that it's not an easy thing to write about (but really, aren't the best things in life hard to simplify in a sentence or two?). The main difficulty here is it's not as good as the first two, but it's not a bad film. In a way it almost feels like its own version of Rebuild of Evangelion, alternately retelling aspects of the original story and breaking new ground through its own original narrative.

I swear to God, Evangelion is not my only anime reference point. Remember when I mentioned Cowboy Bebop at the start, too?

To summarise my summary of Madoka Magica: Rebellion, I enjoyed it. It is definitely worth seeing, but with tempered expectations.