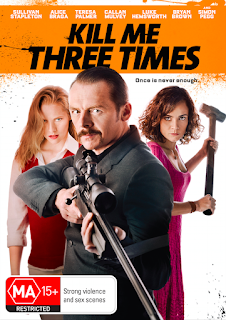 Given there’s not too much out at the cinema worth shouting about at the moment, I suggest you check out Kill Me Three Times. It's a darkly comedic film about hitman Charlie Wolfe (Simon Pegg) who’s having one of those classic bad days. Death and destruction is the order of the day, as a relatively simple contract killing quickly spins out of control, with poor Charlie continuously in the wrong place at the wrong time.

Directed by Kriv Stenders (Red Dog) who delivers an entertaining little film which flaunts the picturesque Western Australian shooting locations. Kill Me Three Times will appeal to anyone who got a kick out of films like You’re Next, Seven Psychopaths and Getting Square; the David Wenham/Sam Worthington film from a few years back.

Kill Me Three Times is available on Blu Ray, DVD and digital platforms from the 9th of September.

Make sure you check out the Kill Me Three Times experience here.