Most of our readers will know now that The Flash TV series has been a smash hit with us, and now thanks to Roadshow Home Entertainment you can be in the running to win a copy of season 1 on DVD or Blu-Ray!

If you haven't seen the series at all or are only familiar with the DC Comics here is a quick recap:

After being struck by lightning, CSI investigator Barry Allen awakens from a nine-month coma to discover he has been granted the gift of super speed.  Teaming up with S.T.A.R. Labs, Barry takes on the persona of The Flash, the Fastest Man Alive, to protect his city.

The TV series has been recognised for grabbing lots of the source material from decades of comics and creating an amazing fun filled action drama. There are also a few nice nods occasionally to the previous TV series.


THE FLASH releases September 23rd on DVD & Blu-ray. To be in the running to win a copy answer the following question: "What Superpower would you have and why?" 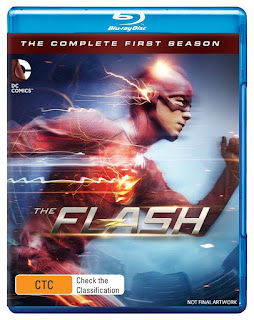 It's that easy! The competition will close this Saturday 19th so get Cracking! Winners will be announced on our Facebook page (you must live in Australia to be eligible)
#BringYourDCHeroesHome Arrow Barry Allen DC Comics Roadshow Home Entertainment The Flash