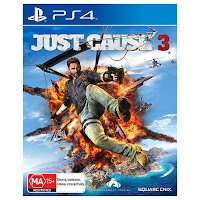 It's mayhem, pure and simple. This isn't the poignant, epic quest that something like The Witcher 3 is, nor is it the kind of character-driven, 'shape the world your way' story of Fallout 4. This is the kind of game where you make your own fun by derailing a pair of trains with limpet explosives before jumping into a plane, flying it at a satellite dish and hookshooting yourself onto an escaping jeep.

Blow up all of the things.

After spending most of his career blowing things up for a living, former Agency Agent Rico Rodriguez returns to his home archipelago of Medici. The place has fallen under the dictatorial rule of General Di Ravello, the unholy bastard child of Caligula and Josef Stalin, and it falls to Rico to liberate Medici from its hated conquerors. So, basically, Rico now has to blow things up for a literal living, rather than just a financial one.

Much like Just Cause 2, the story here feels almost entirely vestigial and unnecessary. You're not here for a heart-rending journey into the depths of the human soul; no matter how hard the game tries I'm not interested in the struggle for Medici's liberation, nor the interactions between Rico and his childhood friend as they try to save their home. The game dwells far too much on these aspects, seemingly not realising that we didn't come for an emotional drama.

No, we came here to blow things up.


And on that front, we get a mixed bag.

One of the best things about Just Cause 2 was the ability to use the hookshot for all kinds of mook-torturing shenanigans. You wanna attach a baddie to a helicopter and go on a flight path that intersects several mountains? Go for it. Feel like shooting a burning fuel tank and watching as it flies off in flames with a screaming minion in tow? Sounds good.

You can still do all that in Just Cause 3, with the added bonus of creating multiple tethers with the hookshot. These tethers can then be retracted; tie two radar dishes together and retract the tethers, and the dishes will snap like twigs and rush towards each other like lovers on honeymoon. Better yet, stick a hookshot line on an enemy chopper, attach the ends to the ground, and watch it drop like a sack of concrete. A fiery, screaming sack of concrete.

The gameplay is predominantly an improvement in most aspects - though the removal of an aim function for any non-sniper weapons is a letdown - and it has never been more fun to hookshot things to other things and watch chaos - literal and figurative - ensue. Minigames that unlock weapon, vehicle and hookshot mods are also available, including a few that aren't just variations of "go and blow these things up for points" (not that those minigames aren't fun, mind you).

That said, the controls feel a little clunky and take some getting used to. Switching from Xbox 360 for 2 to PS4 for 3 probably didn't help, but even when I got a good rhythm going I found myself accidentally bumping buttons that detached tethers or threw grenades at rather inopportune times. There's also a civil war waged between manual and auto-aiming, as the game can't seem to decide which it prefers when mooks are getting gunned down. This is where a zoom function - as in 2, where you could casually headshot guards with ease - would have come in handy.

But despite the game's occasional butter-fingered slips, the true joy found in Just Cause 3 is through making your own fun. This is the kind of water-cooler game that spawns roaring tales of sweet explosions and physics engine abuse; one of mine, mentioned at the start of this review, involved two moving trains, a trio of limpet explosives and a high-velocity getaway on a fighter jet. Another saw me tether three enemy jeeps together that were then attached to the bumper of my car, trailing behind like a grotesque imitation of cans on a wedding limousine. When it comes to pure, simple, organic play, Just Cause 3 excels.

Speaking of things that are organic, the visuals - including beaches, mountain vistas and desert locales - are gorgeous.  Medici looks and feels like a vibrant, colourful archipelago, despite the fact it goes through more biomes than the planets of a Star Wars film. Characters also look less like enlivened pumpkin people than they did in the last game, so the uncanny valley factor's been dialled down a notch.

What concerns me - and ties into the Gameplay above - is that the visuals seem to have been amped up at the expense of substantial content. Medici is huge, as was Panau in Just Cause 2, but where the latter was drenched in random enemy settlements and towns you could find collectibles in, the former feels severely depopulated by comparison. Di Ravello's strongholds are usually very easy to spot on the map, and only a few dozen - as opposed to a few hundred - are peppered around Medici.

It's unfortunate, as one of the best parts of 2 was exploring the expansive map and accidentally coming across an enemy fuel silo or satellite dish outpost. The stumble-upon feel is lacking, and I figure it's because the most time and energy has been spent making the view gorgeous rather than filling it with anything meaningful. The addition of caves, train tunnels and much higher mountain peaks than the last game is nice, but it's not worth it if they don't provide something to the game besides being a pretty postcard picture we can climb. If DLC is planned for Just Cause 3, some more random enemy settlements - or at the very least a few more military airports - would be appreciated.


David Tennant is in this game. Seriously. He's the Medici announcer for the Di Ravello government, giving public propaganda broadcasts - seemingly under duress - whenever you blow up a military base. As a big fan of Tennant, that was kind of a nice surprise.

Elsewhere, the sound is good. Some of the gunshots feel a little samey with each other, and the music, either by design or through glitches, keeps looping incessantly. Not that I don't love Spanish guitars, but they get annoying when the same three chords are played on repeat for hours,

Taking a few steps forward and a couple back, Just Cause 3 is a solid, if at times awkward, explosion bonanza. It's nice having a Just Cause game that takes full advantage of current-generation technology, but a bit more substantial gameplay content at the expense of glorious visuals would not have gone amiss. Looking pretty in a game like this isn't as important as tethering an explosive-laden speedboat to an enemy battleship while running from rocket launcher fire in the rain.

Just Cause 3 is available now on Playstation 4, Xbox One and PC.