The Tale of Shikanoko: Emperor of the Eight Islands - Review

- March 14, 2016
There is a fine line between objective and subjective criticism. Some reviewers can tell you the difficulty in maintaining professional distance when critically analysing something, especially if that something provokes the kind of absolute joy or abject loathing that keeps someone like me motivated to write.

It's a difficulty I run into when reviewing Emperor of the Eight Islands, Lian Hearn's first book in the prequel to her acclaimed Tales of the Otori series. As a novel, there are a few points where Hearn falls short. As a story, I was completely in love with it, meaning those shortcomings weren't as noticeable.

Set 300 years before Across the Nightingale Floor, two rival clans are battling for control of the Lotus Throne. A young man, nearly killed by his lord uncle, is revived as a new man named Shikanoko by a mystical sage. An ancient and mysterious woman gives birth to five supernatural children from five different fathers. After a devastating earthquake and subsequent attack, a young woman takes her stepsister and brother - the latter being the incumbent Emperor - into hiding.

This is where we start with Emperor's labyrinthine plot(s), which Hearn herself - in an interview I conducted with her, which will be posted here shortly - describes as a vinelike structure. That makes it problematic to discuss the full plot(s) of the novel, since so many characters follow paths that are, in some cases, completely unexpected. A further difficulty in outlining Emperor is the direction its narratives traverse, with character plotlines intersecting and rearranging around each other in near-constant balletic movements. An earthquake seen by a character in one chapter has disastrous consequences for several others, whilst a point of view character unknowingly crosses paths with the hero of the story. Emperor trusts its audience to patiently keep track of who, what and where, letting the reader connect the dots when such interplays are formed.

I'll be honest: I did like Across the Nightingale Floor, but part of what bothered me in my review was its foundational nature. As a first book, it felt more like a story largely there to set up the further, exciting adventures of the Otori clan and our heroes, Takeo and Kaede. Emperor doesn't have that problem, hitting the ground running and presenting itself as a very standalone story that does not beggar much setup. It manages to pull off the elusive trick most prequel stories strive for, and usually fail to achieve: Emperor is entirely accessible for those who've never stepped into Hearn's beautifully rendered world, yet also provides plenty of easter eggs and eureka moments for those who are Otori series veterans.

While it does have something of a jarring start, Emperor soon settles into a narrative rhythm that alternates between off-beat and syncopated. The structure is ambitious, especially given the sheer number of featured point of view characters which the novel lightly skips between, and doesn't read like a traditional three-act structure. Rather, this is a book that reads like its own, self-contained epic saga, playing with time and characters by truncating a lot of unnecessary narrative passages; a series of Robert Jordan or George R. R. Martin books crammed into a single, succinct volume. While at times this structure can feel odd, it nonetheless provides the reader with a sense of the novel's sheer scope; compare how Shikanoko begins the novel as timid young child Kazumaru, and ends it as a figure of power and self-assurance, in order to get an idea of how the passage of time really makes Emperor feel like the grand, sweeping epic that it is.

Hearn juggles multiple plots and characters with adept skill, yet occasionally some of both feel a little alienating. Of particular note is the sheer number of anti-heroic (at best) characters the book follows, some of whom can commit entirely reprehensible acts before following up with something diametrically heroic. Among them - and again, trying not to spoil here - are figures like Masachika, Lord Kiyoyori and even Shikanoko himself; in the latter's case, a chapter near the book's midpoint involving Shikanoko committing a monstrous act - a passage I found extraordinarily difficult to read - preceded a sequence where our hero dramatically strikes out on a mighty quest to fell one of the book's main villains as recompense. Very few characters are outwardly heroic in the traditional sense; of those who are, almost all of them are the strong, layered women Hearn has expertly written, such as Akihime and Hina.

Keep in mind, with all that Hearn has accomplished in Emperor, this is just the first volume. The book's sequel, Lord of the Darkwood, is due for release this coming August. Its timing couldn't be better; whilst Emperor wraps up many of its standalone plots by novel's end, there are some lingering threads yet to be sewn up. If you're someone like me, who was utterly engrossed with the book, you'll want the next book in front of you right now.

With a spellbinding series of interwoven plots, handling some exceedingly dark themes confronted by a number of strong protagonists, Emperor of the Eight Islands is a masterstroke for Lian Hearn, and surely a delight for fans of the Tales of the Otori series. Thanks to the way it ends, August cannot come soon enough. 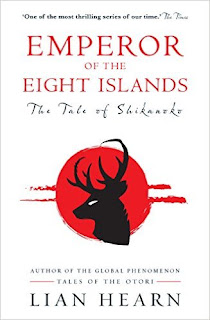 Emperor of the Eight Islands is available in bookstores now.