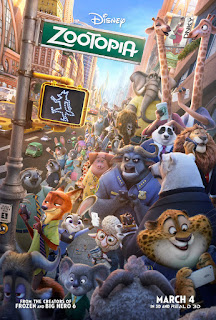 Beneath Zootopia’s furry facade, lurks some compelling social commentary. Sure it’s a kids film about an adorable bunny cop solving a missing persons case; but for adults, the filmmakers have laced this story with the perils of stereotyping and the manipulation of citizens via fear. A lot to squeeze into a animated feature, but the Mouse House just keeps delivering the goods film after film.

After a run in with the local bully, Judy Hopps vows to defy the odds and become Zootopia’s first bunny police officer. Moving from her parents’ carrot farm to the big smoke is an eye-opening experience, as Judy learns life isn't quite what she thought. When she's given her first real case, Judy is forced to team up with some unlikely partners to get to the bottom of it. There's enough mystery to keep adults engaged without it going too far over the heads of younger viewers. 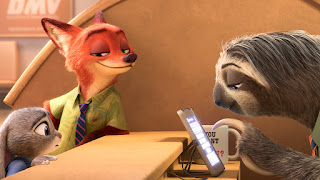 I hate saying this, cause I feel like I'm repeating it with every new film, but this is some truly gorgeous animation. Most notably the texturing of the animals and the environmental effects. The animators walk a fine line between photorealism and maintaining a cartoony-vibe. Just as it was with San Fransokyo in Big Hero 6, the world building here is exceptional. I can only hope this isn’t the last time we visit Zootopia There’s countless sight gags revolving around what it takes for animals of various shapes and sizes to live together (keep an eye out for the multi-tiered train carriages). Classic Disney. 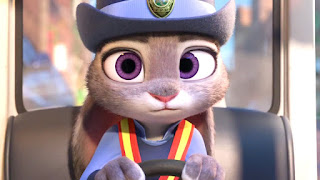 Now granted, the ‘’don't judge a book by its cover’ message is slathered on pretty thickly, which might be too much for some. But at least it took the idea into a somewhat new territory. It's a film addressing prejudices and what their effects are. Heady stuff for a Disney film, which we usually expect to only go so far as to make a point about never underestimating the underdog. Here our underdog (underbunny if you may) dishes out her fair share of judgemental barbs and is forced to learn the consequences of her actions.

Zootopia is definitely worth taking the family out to see. Word of caution though: there are some scary moments which might be too much for the younger kiddies. For all you bigger kids out there, you’ll have a ball.