- August 09, 2016
Good Morning, Midnight is one of the most patient books I've ever read. It's unconcerned with seismic plot twists or a propulsive plot, instead favouring a slow burn approach which emphasises character development. That's both a good and a bad thing.

An unknown apocalypse has struck Earth, leaving two separate individuals who are disconnected from both the world and each other. Self-obsessed scientist Augustine lives on a research base in Antarctica with a young girl named Iris, whilst astronaut Sullivan and the intrepid crew of the Aether are on their way back from Jupiter. With no contact established to the outside world, and no idea of what calamity has befallen mankind, both Augustine and Sullivan ruminate on their lives, their futures and what could be their final days.

On one level, Midnight is an inversion of The Martian's plot points. Rather than being stranded on the Red Planet while a daring crew swoop in to save him, Augustine is marooned in Antarctica - by his own choice, no less - while Sullivan and the Aether head back to Earth, though not knowing he's there. The fundamental difference Midnight has from Martian is a lack of humour, bleak or otherwise; everything is maudlin, depressing, melancholy and one hundred other synonyms for "sad". Sullivan and co. are not optimistic about finding people on Earth, slowly going stir-crazy in their tin can spaceship while their attempts to find joy in life's mundane tasks end up leaving them feeling more dreadful. Augustine and Iris do little except roam the icy wastes, read old science magazines and try (and fail) to make friends with some of the local wildlife. All of this is undertaken with what feels like glacial pacing, despite the book's 250-odd page brevity.

Which brings me back to the point I made at the start: Midnight is an incredibly patient book which puts characters front and center, for better or worse. There's nothing wrong with spending most of the pagecount expanding on characters and backstory - again, books like The Martian and Broken Angels succeed at this - but there needs to be some kind of narrative spine supporting all of those vital organs. These characters may be interesting, and are certainly well fleshed-out, but devoting the bulk of its words to telling us about their pasts leaves Midnight with very little plot to put those pasts into a present context.

There's a lot of telling, but little of it affects what Augustine and Sullivan do in the moment. It's irrelevant that Augustine never really met his daughter when he was younger, because of his own self-interest and work requirements, if all he does is internally mope about it rather than use some of his experience in the way he confronts his Antarctic present. Likewise, all of Sullivan's reminiscence of the life she had back on Earth, including the ex-husband and daughter her passion for space forced her to abandon, doesn't really add up to much in the moment except to serve as a signifier of where her psyche's at in the middle of space. Our protagonists' respective backstories only have meaning if they serve the narrative journey, or at least make the characters more interesting and rounded as they undertake that journey. Since neither protagonist has much in the way of a journey - aside from Sullivan and the Aether crew returning to Earth, a journey lacking significant tension or anything to build interest - all that Midnight accomplishes is in showing us two interesting, multi-dimensional and quite humanly flawed characters who don't really have much to do except ruminate. It'd be somewhat self-indulgent if both characters weren't remarkably depressing to read.

Credit where it's due, though: Lily Brooks-Dalton, making her fiction debut here, writes with surety and clarity. The prose never feels bulky or florid, telling exactly what the reader needs to see with verve while couching several moments in appropriately subtle metaphor. She writes Sullivan as the more narratively interesting and inviting of the protagonists, even though her journey arguably goes through more depressing material than Augustine's. At least you'll feel melancholic with nicely-written prose.

I wouldn't call Good Morning, Midnight a bad book, but I'd also refrain from singing any praises. It's a competent character piece without much of a story hook to hang its hat on. As debut novels go, there are worse things it could be guilty of being. 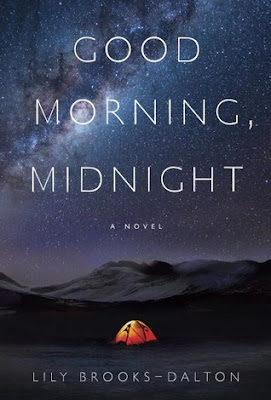