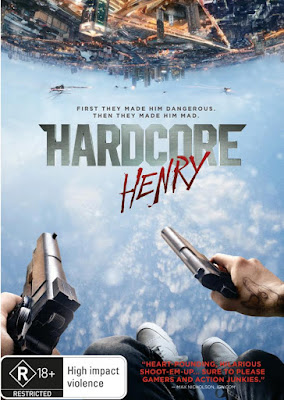 Sorry Super Mario Bros (1993) you’ve finally been dethroned as the pinnacle of video game inspired cinema. Hardcore Henry is here and it’s a truly bat-shit-crazy experience, one which simply must be experienced. Think a first-person shooter video game meets the Bourne series; but with tonnes of extreme violence. Be warned, in terms of the violence, this film will definitely offend some viewers. It makes most modern horror films look like freakin’ Sesame Street! 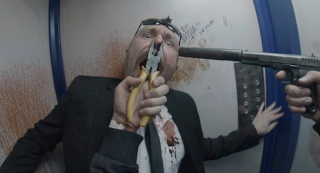 Hardcore Henry is almost every first-person shooter game plot ever conceived rolled into one. Henry wakes in a futuristic medical facility missing his left hand and left foot. His wife and apparent nurse Estelle (Haley Bennett) delivers some basic exposition while reattaching the missing appendages, which kind of serves as a tutorial level. Keeping in mind this entire film is shot like a video game and so never shifts from the Henry’s POV perspective. It’s a style which at first is a little jarring, but we’re given ample time to acclimatize before the action kicks off. And by kicks off, I mean KICKS OFF!! It’s an all-out assault of death defying parkour, brutal hand-to-hand combat, stabbings, shooting, EXPLOSIONS!, TANKS!, BOOM! Well, you get the picture. 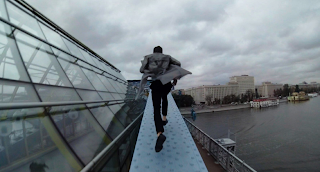 Director Ilya Naishuller delivers a mesmerising cinematic experience. Whilst I can’t say it’s the most entertaining film I’ve ever seen, it’s still a feat worth marvelling at. It brings something new to the action genre, which for the most part is overcrowded with generic lacklustre titles which aren’t remotely interested in testing the boundaries of the form. Hardcore Henry is unlike anything you’ve probably seen before and for that it must be commended. 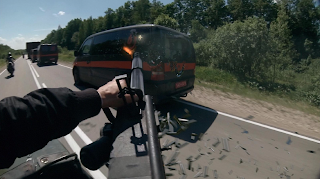 Performance wise Sharlto Copley absolutely dominates this film. He plays a slew of characters; ranging from the mild mannered to borderline homicidal. Copley also shares an Executive Producer credit, which hints at why he’s so dialled-in. I’ve always loved his work; he’s at his best when he’s allowed to let the manic-good-times ride! Danila Kozlovsky plays the villain Akan. His performance is a touch too broad for my liking, however it’s in keeping with the general tone of the film and wouldn’t be out of place in any AAA video game release. He is however equipped with an interesting set of powers, which leads to some visually striking sequences. So that’s a bonus.

Grab some mates, some stiff vodka screwdrivers, switch your brain off and go for the ride that is Hardcore Henry. It’s not the brightest thing you’ll see all year, but damn well may be the wackiest! And honestly, isn’t that what we all need from time to time?

Hardcore Henry is available on Blu-Ray & DVD from August 3rd.