In the late throes of 2016 I discovered Crazyhead waiting unassumingly in my Netflix recommended list. Apart from two female leads and some sort of supernatural element, I really didn’t know what to expect from this quirky horror-comedy. What I found was a uniquely British take on Buffy, only with way more swearing and dick jokes. 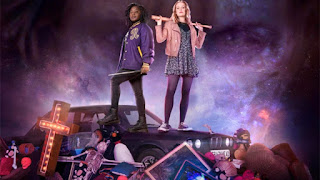 Cara Theobold, who you might know as the voice of Overwatch’s Tracer, stars as Amy, a dead-end-twenty-something who realises she can see demons, who as it turns out, have been hiding in plain sight amongst humans for centuries. In a not at all surprising turn of events she finds herself caught up in stopping a demonic conspiracy to open the gates of hell. Who would have thought?

Aiding her in this cliche quest is the socially-awkward Raquel, Susan Wokoma, who prefers to beat demons with a night-stick first and ask questions later. Raquel fancies herself Amy’s demon-hunting mentor, although it quickly becomes apparent she’s got as much to learn as Amy. Rounding out the team and acting as a sort of foil to all the supernatural goings-on is Jake, Amy’s work friend and all around doormat who plays driver for the two girls. 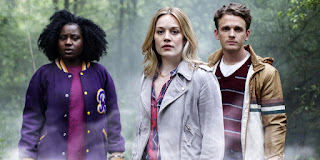 Yep, it’s a pretty stock standard starting point for the supernatural monster hunter genre, and as an entry into the genre it doesn’t really contribute anything new. Demon’s are for the most part just normal thugs with creepy faces, possession works the same way it does in every other show involving demons and exorcisms feature plenty of unholy screeching and cryptic faux-Latin. Apart from adding the rule that you have to urinate on someone in order to exorcise a demon possessing them (which makes for some great, albeit cringe worthy, comedic moments) Crazyhead doesn’t really add anything of substance. To put it bluntly, if you are looking for deep and engaging lore this is not the show for you.

What you will find, however, is crude humour and plenty of it. This is all courtesy of Howard Overman, the guy behind Misfits and the creator of Crazyhead, who seems to delight in filling his shows with us many cringe worthy sex jokes as possible. Ball grabbing, sleeping with your geography teacher, arse-poles; it’s all fair game.

But apart from keeping the show light, this barrage of immature humour draws attention to the inherent awkwardness of navigating sex, sexuality and relationships in your early 20’s, a recurring theme of the show and easily its biggest strength. 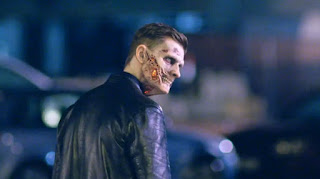 Where Crazyhead succeeds where many other shows in the genre fail is in its portrayal of the dynamic between Amy, Requel and Jake. Instead of getting caught up in detailing what circle of hell the demons come from or chasing intricately choreographed fights and supernatural spectacle, Crazyhead instead focus on character relationships. Sure, some of the scenarios our three heroes find themselves in are pretty out-there, but the sentiments feel real and grounded. Particularly Raquel and Amy’s friendship, which is hands-down the best part of the show.

Look, It won’t be the next Supernatural (and that’s not necessarily a bad thing) but Crazyhead certainly has an undeniable charm. Instead of getting lost in genre it fights hard to have it’s own voice, and it really is a stronger show for it. While it might not be for everyone, if you can handle a bit of blue humour and lacklustre prosthetics, Crazyhead is well worth a watch.