Will Save The Galaxy For Food - Review

- March 07, 2017
Way back in 2010, celebrated video game critic, acerbic host of Zero Punctuation and permanent cynic Yahtzee Croshaw released Mogworld. His first published novel through Dark Horse Books, Mogworld was a delightful, parodic send-up of MMORPGs like World of Warcraft coupled with a surprisingly emotional "what measure is a man"-style plot about the life of a video game NPC. This welcome debut was followed two years later by Jam, a black comedy involving a bunch of everyday schlubs who had to navigate government conspiracies, a devastated inner city Brisbane and a flood of carnivorous, man-eating strawberry jam. Both books had heart, even if the jade-coloured glasses were still wrapped around them like cars on oak trees.

Yahtzee's third novel, Will Save The Galaxy For Food, is a decent enough successor to the above two novels. The book's - and, by extension, the author's - cynicism, however, is a bit off-putting.

In a future where instantaneous space travel has largely eroded the need for star pilots and their clunky piece-of-junk starships, a down-on-his-luck former space adventurer is recruited for a singular task. The job: impersonate one of the most famed (and infamous) star pilots in history, Jacques McKeown, in order to satisfy a powerful crime boss and his annoying teenage son. If he can pull it off, he'll have enough money to last a lifetime. If he can't, he'll be sleeping with the space-fishes.

If I had to distil the book into an X-meets-Y arrangement, I'd call it The Hitchhiker's Guide to the Galaxy-meets-Futurama, with the merest pinch of Star Trek added for taste. Douglas Adams is the clearest influence for Yahtzee, judging by the askance sarcasm and subtle, condescending wit used throughout both the spoken dialogue and the McKeown impersonator's internal thoughts. There's also some Futurama-style skewering of contemporary sociopolitical movements and ideologies, as well as one or two veiled jabs at Yahtzee's home base of the video game industry. It's also clear the book has a rather irreverent perspective on how iconic sci-fi is viewed by contemporary audiences. If you can think of a classic sci-fi story - up to including B-grade stuff like Forbidden Planet - chances are good that the book will take a few shots at it. There are also some nicely apposite references to technological advancement at the expense of human labour, a relevant workforce issue which Yahtzee makes it very clear he's opposed to.

While all of this makes the book sound great - and make no mistake, it's a good book with quite a few laughs - the underlying issue is its cynicism. The opening section, where the McKeown impostor makes it bitterly clear that he and other star pilots have become obsolete since the glory days of space travel, establishes that the book's concerned with the darker side of nostalgia. It only goes downhill from there, with the impostor and other characters constantly drawing attention to the pitfalls of nostalgic reminiscence and the inability of pilots like the impostor to move from one life stage to the next. It initially feels like the book's setting itself up to be the kind of affirmative, life-changing narrative which is ultimately uplifting, where the protagonist learns how to not be inflexible in order to put nostalgia aside and to move on by story's end.

Without wishing to spoil, I'll just say that the book largely leans in the opposite direction instead. Life sucks, you will become obsolete if you live long enough, people will always try to exploit you and, most bleakly, there will rarely be a silver lining to any of it. Enjoy!

Admittedly, that cynicism is present more in the subtext of the story rather than the text itself. Those of you who, unlike me, don't read too much into things for a living will probably get more enjoyment from the book, which on the surface is a largely funny, suitably pulpy jaunt through space. As comedic as it is, though, the book does have an issue with how it treats female characters. Yahtzee's written humourless and manipulative women in his books before, sometimes with justified reasons - look at secret agent X in Jam as an example par excellance - but it feels like almost every female character here has something of a bitter shrew temperament about them. Most egregious is main character Penelope Warden, a po-faced, executive-level bureaucrat who literally takes every opportunity to figuratively screw over the McKeown impersonator for her own gains. Her ruthless attitude towards him would be entertaining - given that he's definitely no saint, and watching him get karmically shafted is amusing - but it soon becomes too frequent and mean-spirited, especially for somebody who is ostensibly the deuteragonist of the story. With the exception of put-upon Jemima, a young girl with a notable intergalactic heritage introduced later in the book, I found it hard to relate to any of the female characters largely because the story makes them come across as conniving, opportunistic and devoid of good nature, starkly contrasting a lot of the more reasonable male characters (and a few of the more reasonable sentient space blobs, too).

While Will Save The Galaxy For Food is an entertaining diversion, it's not quite at the same heights as the darkly comedic Jam or the marvelously irreverent Mogworld. If Yahtzee Croshaw's books were all hot beverages - mainly because I'm having one while I write this - then Mogworld would be a sweet, frothy and solidly-flavoured cappucino, whilst Jam would be a chai latte spiced up by some gunpowder green tea in order to make you snort out loud at inappropriate moments. In that vein, Will Save The Galaxy For Food is what appears to be a fairly lively latte dusted with cinnamon, but beneath the veneer of comforting milk and cream is one of the most bitter long blacks you've ever tasted. It's still good for those who are into that sort of thing, but others may have trouble swallowing it down. 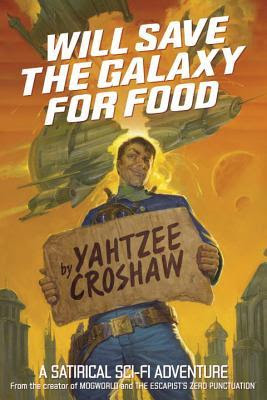