DC fans your champion has finally arrived! Huzzah! No longer will you lament what could've been. Wonder Woman breathes urgent life into a franchise which has withered like a slowly deflating balloon. I've got a few niggling complaints, but Wonder Woman is a tonne of fun. 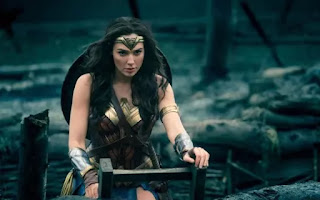 Batman V Superman: Dawn of Justice was our introduction to Gal Gadot’s Wonder Woman; sadly her role was limited to a bit of banter and the climatic fight scene with Doomsday. For such an iconic character, it was an underwhelming debut. All is forgiven now that director Patty Jenkins (Monster) has delivered such an entertaining film. Mind you it's another origin story, and I’m almost done with origin stories, mostly because they follow rigid templates where seemingly minor details are substituted depending on the hero’s specific journey.

That being said in the case of Wonder Woman/Diana Prince, she’s an Amazonian Princess from the mystical land of Themyscira, which is exclusively populated by women. Trained from a young age to be a great warrior, her life is forever changed when US pilot Steve Trevor (Chris Pine) comes crashing down requiring her to save his life. Nice little role reversal there. Unbeknownst to the ladies of Themyscira, World War 1 rages on around their hidden island. Fuelled by ancient mythology, Diana feels duty-bound to head into the realm of mortals and put an end to the Great War. With Steve and a band of merry-men in tow, she seeks justice in a war which is seldom just. 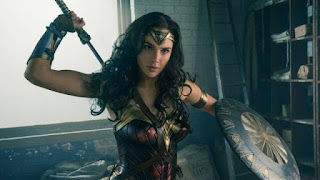 Having been burnt by DC films too many times, I entered this film with my guard well and truly up. Just like previous films, I’d heard the internet whispers about production problems but thankfully none of that was on display. In many ways it’s a merging of Captain America: The First Avenger and Thor; in that Diana is a ‘super-soldier’ kicking ass in a World War setting, but also a fish-out-of-water, much like Thor. There are plenty of laughs to be had about the different customs of Themyscira and the real world, which let’s be honest, that gag never gets old. But even with these similarities, Wonder Woman has a distinct look and unique tone. There’s freshness to it, despite the occasional generic plot development.

Performance wise Gal Gadot is fantastic as Wonder Woman. She manages to convey Diana’s strength of conviction and pursuit of justice, but also her naivety. Her physicality is  impressive, unlike the awkwardness of an actor like Finn Jones in Marvel’s Iron Fist; Gadot seems very comfortable with what’s asked of her in the fighting choreography department. Chris Pine is basically rehashing Captain Kirk from the recent Star Trek films. He's surviving on his charm and witty quips, but deep down you know he’s got a heart of gold. It works for him, the material and ultimately the film. His chemistry with Gadot is one of the highlights of the film. 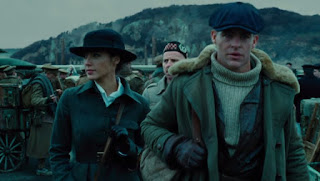 Patty Jenkins takes us from the tranquillity of Themyscira to the horrors of the Western front, all the while imbuing the film with a sense of patience and restraint. Not exactly what you'd expect from a massive blockbuster. Whilst the iconography of war is everywhere, Jenkins still takes time to show the horrific realities of conflict. There’s a touching scene where early in their quest Diana and Co are crossing a bridge, a point of no return as it were. They walk through a group of badly wounded soldiers returning from the front. Diana is forced to witness the human cost of war. A sobering reminder of what is at stake. It's those lingering shots of missing limbs and bandaged heads which resonate well after the scene. I love these touches. Jenkins may not be the first name that pops into mind when considering directors for a film like this, but I’m so glad she got the gig. Plus let’s just take a moment to congratulate Jenkins for being the first female to direct a film with a $100 million budget. Hopefully this leads to real change in the industry.

Maybe I’m overthinking things, maybe I'm getting too old for this shit, but geez shoddy CGI work is infuriating. Nothing takes me out of film quicker than gaudy CGI. There's no excuse for the subpar CGI that plagues some of the bigger action sequences in Wonder Woman. Granted the same can be said for most of the Marvel films too. I’d prefer studios attempt more realistic set pieces and use CGI to shade in the edges, rather than go for the bombastic third act showdowns which evidently they can't resist. When Wonder Woman finally encounters her nemesis, their fight just echoed the weaker elements of Man of Steel and Batman V Superman: Dawn of Justice. I'm over the tensionless rumble between to CGI Gods waiting for our hero to do something ‘extraordinary’. It’s all been done before and should be better.

Wonder Woman is probably the best DC film since Nolan’s The Dark Knight, although given the state of affairs at DC may seem like damning with faint praise. I emerged recharged and hopeful; a damn sight better state than Zack Snyder’s recent marathons-of-doom left me in. Patty Jenkins has delivered a rollicking adventure which I hope paves the way for other female directors to helm productions of this size.

If you see Wonder Woman and agree or disagree with my thoughts, feel free to drop a comment below or come over and play on our Facebook page