Terminator 2: Judgement Day 3D in cinemas 24th of August - One Week ONLY! 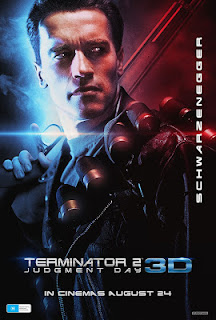 Is Terminator 2: Judgement Day a perfect film? Can any film really be “perfect”? These questions swirled around my head whilst watching Cameron’s masterpiece in a recent 3D screening. Sure I’ve got some niggling quibbles here and there; but as far as a cinematic experience, I think it might be perfect. Maybe it’s the nostalgia speaking, but Terminator 2: Judgement Day resides in the pantheon of perfection alongside such gods as The Empire Strikes Back, Alien/Aliens, Jurassic Park, Indiana Jones (minus the Crystal Skull) and a few more. These are the films which not only defined an era of my life, but defined what I wanted from going to the movies. With every subsequent entry in the Terminator franchise, we’ve seemingly drifted further and further away from the genius that is Terminator 2: Judgement Day.

Terminator 2: Judgement Day 3D returns to cinemas from the 24th of August for one week only. Should you go see it? You’re damn straight you should. I’m not the biggest fan of 3D films, but there’s enough here to warrant a watch. Admittedly the 3D didn’t add that much to the experience, given that the film wasn’t produced with 3D in mind. For me it simply added depth to the screen and layered feel that wasn't there before. But this is Terminator 2: Judgement Day! It’s one of the greatest films of the past 30 years, a film which defined the marriage of physical effects and practical storytelling. You probably won’t get a chance to see it on the big screen after this release. If this were Total Recall Arnie would be telling you to “get your ass to Mars”, well i’m telling you to get your ass out to the cinema.

I don’t need to tell you how amazing Terminator 2: Judgement Day is; but in 3D it’s like when Malibu Stacy got a new hat. Doesn’t sound like much, but IT”S A NEW HAT! Don’t tell me you’re not craving that sweet sweet new hat.

I want to know what you consider a perfect movie. Please sound off in the comments below, or pop over and play on our Facebook page.