Reese Witherspoon is having a moment and it’s a pleasure to see. It is so satisfying to witness that the actress who gave us the utterly original and terrifying, Tracy Flick, has still so many more surprises for us. That super sharp, full of intensity, scarily Machiavellian high-school girl (perhaps sociopath) promised an actress who does not hold back. Reese commits fully and with real vigour and we have seen this over and over again in roles like Legally Blonde (the original is still so fun), Walk the line, Vanity Fair and more. Recently the critically-acclaimed and Emmy award winning TV series Big Little Lies which is sensational, as well as her role in it. 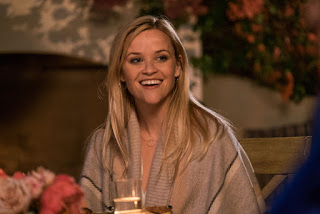 In Home Again Reese has returned to the romantic comedy genre which she has championed in her career many times and sadly, to some questionable results. I know Sweet Home Alabama is a favourite among many but sadly it did not ignite me. I am quite fond of Just Like heaven with Mark Ruffalo (don’t judge) which I found charming but other weaker pursuits include Four Holidays, How Do You Know and This Means War.

I am happy to say, Home Again is not one of her weaker romantic-comedy genre films but its strength does not actually centre on the romance. Reese plays Alice Kinney, a recently separated wife and mother to two daughters who returns with her young family to live in her father’s old Spanish mansion in Los Angeles. We find out early on that her father is a big deal and was a visionary Hollywood director of the 70s and Alice’s mother, Lillian, (Candice Bergen) was his actress muse. Alice goes out on the town with a couple of girlfriends to celebrate her 40th birthday and they meet Harry (Pico Alexander), George (Jon Rudnitsky) and Teddy (Nat Wolff), three young, charming 20-somethings. They end up back at Alice’s house that night and through some turns of plot, end up staying in Alice’s guest house at the invitation of her screen-idol mother, just while they try and kick start their film making careers. Into this mix, Alice’s, “big deal” music producer husband, Austen, (Michael Sheen) decides to check in. 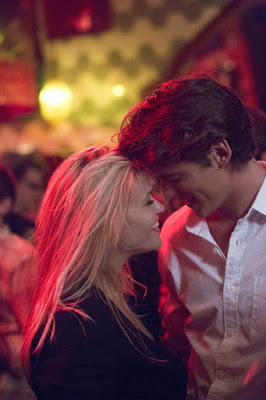 Whilst the marketing and PR campaign would have you believe that the real hook for this film is Entourage meets 3 Men and a Baby dynamic that really engages. Harry, George and Teddy are alike the “Entourage” boys with their group loyalty and trying to make a break in Hollywood, but there the similarities end. These guys are younger, kinder and more intelligent. Harry is most like a “Vince-type”, professionally charming (teetering on smarmy) brains behind the outfit. Casanova style, he is intent on sweeping Alice off her feet but he is not heartless. The other boys, however, come across as more obviously genuine and kind souls. George is a sensitive and smart screen-writer who forms a friendship with the older daughter, Isabel. Teddy is Harry’s younger brother and the more easy-going of the three. He is the promising, fresh-faced acting talent of their acclaimed short film and whilst Teddy does not have as much screen-time as the other boys, he gets to deliver one of the film’s most enjoyable surprises. The boys all pitch in with helping Alice look after her daughters and they cook, clean and are genuinely grateful for Alice’s generosity. And while you may eye-roll and think, “oh geez…this is some far-fetched female-fantasy”, what is so surprising about the film, is its complete sincerity, or rather you feel the sincerity of the boys. But let’s take note and if this configuration was reversed, and Alice was Adam with three young female filmmakers living in his home and pitching in with the house and family duties. That scenario would be appalling. Reese is turning gender politics on its head. An older woman in a romantic liaison with a younger man….gasp!!! And whilst this scenario is somewhat appealing.

I am sick of watching romantic-comedies pitched at a female viewer, that make me feel stupid for watching them. Or worse, make me feel like the filmmakers think women like this kind of stupid. The melodramatic, false situation-comedy conceits. The heroine who is meant to be super-smart yet makes really dumb decisions for reasons of plot. The scene in the film where for the sake of extreme humour, someone (usually the heroine) goes absolutely bonkers and the film ends with a saccharine-sweet resolution. Whilst Home Again plays into some of the trappings of this genre with its fantastic real-estate porn, aesthetically pleasing characters, and occasional silliness, it is better than these films. 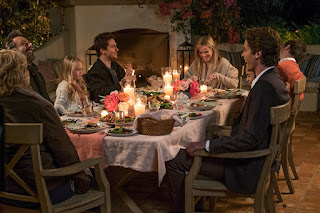 Home Again has a heroine who sticks to her guns and refuses to make sacrifices on self. Alice is a sexy, working and realistic mother who sometimes rocks fantastic cocktail dresses or high-waisted mum jeans and lays down the rules of the house….and this makes her so cool. Reese is a delight and the camera just loves her lively, expressive face, replacing any need for a laborious, exposition-style internal voice-over (another cliche of the rom-coms). Home Again also boasts a well-written script, that is entertaining and didn’t have me cringing over banality or unreality. How refreshing!

Home Again is genuinely surprising and how often do you get to say that about a rom-com?! But it’s great merit lies not just with its mature writing around an older-woman and younger-man relationship (so sexy!), but also it provides an engaging perspective on relationships in general and how, even in unlikely situations, you can forge valuable connections through kindness.